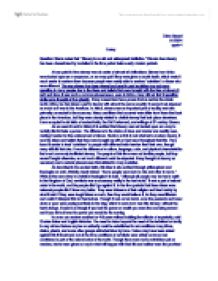 Sterns notes that &quot; Slavery is an old and widespread institution.&quot; Discuss how slavery has been viewed/used by societies in the time period before early modern periods.

Zohra Sayani 01/23/04 apwh-4 Essay Question: Sterns notes that " Slavery is an old and widespread institution." Discuss how slavery has been viewed/used by societies in the time period before early modern periods. At one point in time slavery was at center of almost all civilizations. Slaves from Africa were looked upon as a nonperson, or as many put it they were given a social death, which made it much easier to enslave them because people were easily able to enslave "outsiders" or those who were different. The way slavery has been viewed and used in past societies may not seem appalling to many people due to the ideas and beliefs that were brought with the idea of slavery it self; and since it was such a common phenomenon, even in Africa, many did not find it appalling while some thought of it as ghastly. Many researchers have proven that as well as the whole world, Africa, too has taken a part in slavery with almost the same severity; it was just not exposed as much as it was in the Americas. ...read more.

The people of this time were not terrible people, but they weren't taught otherwise, so not much different could be expected. Many thought of slavery as necessary and a natural phenomenon that existed in many societies. As described in the ancient texts, this idea is also evident through philosophers and theologies as well. Aristotle clearly stated, " Some people were born to rule and other to serve." While at the same time in Christian theologies it is said, " Although all people may be free in spirit in the Kingdom of God, servitude was a necessary reality in the real world." It was a part of natural order in the world, and the people didn't go against it. In the time periods that these ideas were released people didn't know any better. They were followers of their religion and lived mainly by what it said. If they were taught ideas as such, than they would believe it, for they were illiterate and couldn't interpret this for themselves. ...read more.

A slave was a slave, no matter how high off their position may have been. No matter what the circumstance, they were puppets to the wills' of their masters. The fact that they were slaves and unconstrained by kinship or other ties and obligations made it easier for them to be trusted. Now it is argued about what led the modern world to slavery. We have texts to date back slavery atleast as far as 5th century Greece, so it can be seen that it has been around for many thousands of years. Though, it is also understood that in those regions and time periods slavery was not as widespread as it became in the Atlantic slave trade with Africa, it was still around and kept building up leading to this one event. African societies did not live in isolation from the pressures and examples of the world's economy, into which they were drawn into. Europeans demand for captive labor was the pressure on the Africans. It wasn't viewed as anything terrible in that time period and was used as commonly throughout the world and in many civilizations. ...read more.