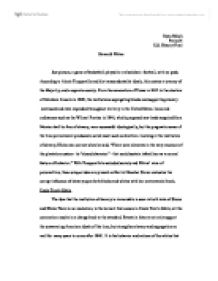 Ryan Maish Period 6 U.S. History Final Stowe & Elkins Just picture, a game of basketball played in a wheelchair: football, with no pads. According to Alexis Tocqueville and his transcendentalist ideals, this creates a tyranny of the Majority, and a separate society. From the annexation of Texas in 1845 to the election of Abraham Lincoln in 1860, the institutions segregating blacks and supporting slavery continued and even expanded throughout territory in the United States. Laws and ordinances such as the Wilmot Proviso in 1846, which proposed new lands acquired from Mexico shall be free of slavery, were successful ideologically, but the pragmatic sense of the time period never produced a solid result such as abolition. Looking at the institution of slavery, Elkins was correct when he said, "There were elements in the very structure of the plantation system- its "closed character" - that could sustain infantilism as a normal feature of behavior." With Tocqueville�s secluded society and Elkins' view of personalities; these unique ideas are present as Harriet Beecher Stowe evaluates the corrupt influence of slavery upon both blacks and whites with her controversial book, Uncle Tom's Cabin. ...read more.

The rousing force behind Uncle Tom's Cabin was the Fugitive Slave Act of 1850 that returned runaway saves to their Southern masters. Tom's unwillingness to reveal the escape plans of his fellow slaves is similar with the reaction that abolitionists would have had. The abolitionist morals of slavery are far more important than rewards. In the end, Tom decided that they were more important than his lfe, and Tom felt strong in God to meet death, rather than betray the helpless. According to Eugene Genovese, Tom and the sacrifice of his life to God is completely legitimate. Genovese links slave's contentment with religion and a unique paternalism, one of which Tom devotes his life to. As he is close to death, he is "willing to bar all I have, if it'll only bring ye to Christ O Lord!" Stowe shows religion as an escape point for Tom from the suffering, and "torture, degradation and shame, [was] neither degrading nor stripes nor blood, nor insults can make the Christian's last struggle less than glorious." Although Genovese�s thesis of religion and paternalism protecting the slaves has some authenticity, it is simply not strong enough to prevail over abuse in the closed structure of slavery. ...read more.

personality of blacks, and the reality that the African-Americans were still suppressed by white expectations and contained by the institution of slavery. The tremendous control white slaveholders held over their black slaves left no chance of escaping the, as described by Elkins, "system of slavery." The importance of her book is easily seen, as Martin Duberman argued that "before 1845, the Northern attitude toward slavery rested on this comfortable belief in the benevolence of history...when Texas was annexed, it finally seemed clear that the mere passage of time would not have a solution." Duberman believes it was abolitionists that started the ideological jump to end slavery. They realized, that it needed to be stopped, and Uncle Tom's Cabin, came at the perfect time to jumpstart the movement to end the evils of slavery. Blacks were a hotly debated issue, from annexation of Texas in 1845, thru the Civil War, and even in the 20th century. Events in history during the time period of 1845-1860 did not successfully result in freedom for the slaves; it wasn't until more than a century later that blacks could shatter the monumental pillars holding up the institution of slavery and have influence in American politics and culture. ...read more.