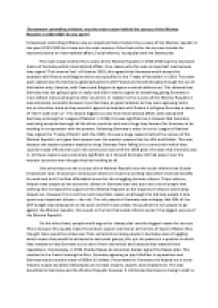 Stresemann controlling inflation, was the main reason behind the success of the Weimar Republic in 1923-1928 do you agree?

These reforms helped many people as the economic climate in Germany was very poor and a lot of people had nothing, this increased the support of the Weimar Republic as the majority of citizens were being helped out. However this is not the most important reason as although this did help people it also upset very important citizens ? the rich. The rich people of Germany was unhappy that 26% of the GDP budget was being spent on the poor and felt it was unfair; this pushed the rich people to go against the Weimar republic, this results in the fact that social reforms weren?t the biggest success of the Weimar Republic. On the other hand, people would argue the ?dawes plan? was the biggest reason for success. This is because this equally made the western powers worried as at the time of hyper-inflation they thought there would be a take over from extremists as many people in Germany were struggling which means they would be attracted to extremist groups; this put the powers in a position in which they needed to help Germany out to save it from extremists and because they wanted there reparations. ...read more.

Firstly Stresemann created a new currency called the ?Rentenmark? which was worth 1000billion marks. This quickly bought inflation under control. However, this was not the most successful factor, this angered the middle and upper class citizens of Germany as due to the new currency being bought in, and it resulted in many of people?s savings being lost who were quickly blaming the Weimar Republic for these actions. This was probably the biggest factor that created anger and hatred towards the Weimar republic. To conclude, the biggest reason for the success of the Weimar Republic through the actions taken by Stresemann was the steps taken within international affairs. This gave Germany the biggest bargaining power over the western powers by signing the treaty of Berlin. Moreover, it was when Germany was accepted by the other countries as they were allowed to join the ?League of Nations?. Overall this was a huge success for Germany as they were progressing to be an alliance with many of the countries that once went against them, this was a more important reason to controlling inflation. ...read more.