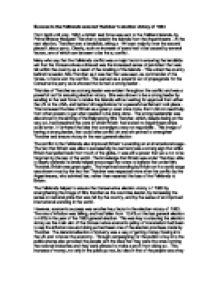 Success in the Falklands ensured Thatchers election victory of 1983 Discuss.

Success in the Falklands ensured Thatcher's election victory of 1983 From April until July, 1982, a british task force was sent to the Falkland islands, by Prime Minister Margaret Thatcher to reclaim the Islands from the Argentineans. At the next election, Thatcher won a landslide, taking a 144 seat majority over the second placed Labour party. Clearly, such an increase of seats had to be caused by several factors, one of which can be seen to be the a, conflict. Many who say that the Falklands conflict was a major factor in ensuring the landslide win that the Conservatives achieved was the increased sense of patriotism that was felt within the country as a result of the retaking of the Islands. This united the country behind its leader, Mrs Thatcher as it was her that was seen, as commander of the forces, to have won the conflict. This served as a powerful act of propaganda for the Conservative party as is showed that is had a strong leader. ...read more.

The fact that Britain was able to successfully its own land was a strong sign that while Britain had pulled back from much of the globe, it was still a power that was not to be forgotten by the rest of the world. The knowledge that Britain was under Thatcher, able to clearly defends its lands helped encourage the voters to believe that under Mrs Thatcher, Britain was great again. The improved standing by Britain on the world stage was shown most by the fact that Thatcher was respected more after the conflict by the Argentineans, who admired her, rather than resented the loss of the Falklands to Britain. The Falklands helped to ensure the Conservative election victory of 1983 by strengthening the image of Mrs thatcher as the countries leader, by increasing the sense on national pride that was felt by the country, and by the sense of an improved international standing in the world. However, economic success was another key factor in the election victory of 1983. ...read more.

As a result, Labour MPs Shirley Williams, William Rodgers, Roy Jenkins and David Owen) broke away to form the Social Democratic Party. This fracturing of the party was seen as a lack of cohesion within the party, and put many off voting for the party. It also cost the Labour party as many voted for the newly formed SDP as a more reasonable leftist party. The Labour party was also against conflict in the Falklands and as such was not behind the task force, and so way seen as being unpatriotic, helping to improve the image of the Conservative Party Overall, success in the Falklands did ensure Thatcher election victory in 1983. Thatcher would have won the election without this success, due to the economic policies that she had put in place, and the shift to the left that Labour made. However the conflict ensured her victory as it gave her a large majority of votes that ensured her victory. While she would have won the election anyway, the success in the Falklands strengthen Mrs Thatcher's position as leader and made her reelection as PM certain. ...read more.

The student answers the question well by addressing three different factors in Thatcher's victory in 1983, which is essential because it shows that you understand there can be more than one opinion on what causes a historical event. The student ...

The student answers the question well by addressing three different factors in Thatcher's victory in 1983, which is essential because it shows that you understand there can be more than one opinion on what causes a historical event. The student lays their essay out well by addressing each factor in turn, which shows they can organise their knowledge. They could improve this by summarising each factor in their introduction, as this would immediately show the examiner that the student is aware of the need for alternative interpretations, and it would also double up as a plan in case the student lost track later in the essay.

When talking about events in military history, such as the Falklands War, there is a risk that students will start to tell the story, as it is easier to remember details. But this student avoids that, and explains why it was significant and what the effects were. For example, they say: ''She was shown to be a strong leader by sending in the task force to retake the Islands without waiting for approval from either the UN or the USA''. This not only uses factual evidence (the fact she didn't wait for approval) but also says why it was significant (it showed she was a strong leader). This shows that the student can do more than remember details: they have the understanding to explain significance. The student also makes good use of statistics as evidence: instead of just saying ''inflation fell'', they said it fell to 4.6%, which is good as it shows they have enough knowledge of history to see that this is a low number, and consequently an achievement by Thatcher. The conclusion lets the essay down slightly because it says Thatcher won due to the Falklands but then says that she would have won anyway, which is a contradiction. It would be better to choose one factor and point out the advantages of that interpretation: that way, you are showing you have the understanding to assess the interpretations and pick out which is best. A stronger conclusion would have made this essay 5 stars.

The spelling, grammar, and punctuation in this essay are excellent, which means the examiner can focus on giving the student marks for their knowledge and understanding rather than trying to work out what they mean. The essay could improve by adding in technical historical vocabulary such as ''change'': for example, after talking about the drop in inflation in ''This was key to ensuring the election victory'', the student could say ''This change in inflation levels was key to ensuring election victory'' as this would show they understand the importance of a change from higher inflation to lower inflation.