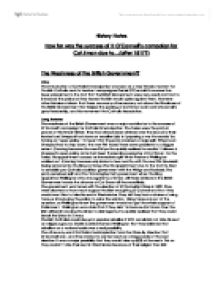 History Notes How far was the success of D O'Connell's campaign for Cat.Eman due to....(after 1817?) The Weakness of the British Government? Intro: The introduction of Catholic Emancipation was seen as a very historic moment for the Irish Catholic and its forefront campaigner Daniel O'Connell. Its success has been pinpointed to the fact that the British Government were very weak and had to introduce the policy as they feared the Irish would uprise against them. However other historians take in that there are many other reasons, not alone the Weakness of the British Government that helped the passing of Cat Eman such as D O'Connell's great leadership, and his movement the Catholic Association. Long Answer: The weakness of the British Government was a major contributor to the success of O'Connell's campaign for Catholic Emancipation. The Tories were the party in power at this time in Britain. They had always been divided over the issue and their leader Lord Liverpool had done an excellent job in 'papering over the cracks' by having an 'open policy.' It meant that the party avoided a major split. When Lord Liverpool had to step down, the new PM faced these same problems to a bigger extent. Canning became the new PM yet he quickly realised he couldn't followed Liverpool's open policy as he had been the leading supporter of Cat Eman. for the Tories. His appointment caused an immediate split when Peel and Wellington walked out. ...read more.

He set about providing a framework for the political action of catholic masses as they responded to the publicising of their grievances. For this he pulled in the Catholic Church and priests. The final element O'Connell used was the 'catholic rent.' 1d. per month was collected by the local priests. Debates on how to spend the money and the actual collecting of the rent, helped create the first mass Irish political 'party' along democratic lines. O'Connell himself possessed a unique quality in that he was a great orator. He used this skill in holding mass meetings, where thousands turned up to listen to him demand equality for Catholics. His speeches set the tone for the political campaign and inspired many to join the Catholic Association. To add pressure to Parliament he used petitions and 'grievance letters' which highlighted the problems and made sure Westminster knew how unhappy the Irish Catholic was. In 1828 after the revolt of the 40-shilling freeholders, O'Connell realised that he could contest an election. With this confidence he stood for the Clare by-election, knowing that if he got elected that his refusal to take the oath of supremacy would exclude him from Parliament, and the question would be brought to a sharp and decisive issue. Five days after the poll began, O'Connell was declared elected. This triumph of O'Connell convinced the Roman Catholics of their strength, which worried those in power in Britain. They now had to deal with the issue or else feared the worst. ...read more.

The 40-sh freeholders were those under the rule of Landlords yet as their property were over 40-sh they had the privilege to vote. Many however voted not under their conscience but under the pressure that they would be evicted. O'Connell didn't have faith in them that they would vote for pro-Emancipation candidates in elections. However they proved him wrong. They took inspiration from O'Connell and under the guidance of the clergy, they had begun to acquire a sense of strength and solidarity, which was clearly revealed in the general election of 1826. The Catholic Association called on all voters to support candidates favourable to Emancipation; concentrating its efforts on four counties (Louth, Monaghan, Waterford and Westmeath) in each of which it succeeded in returning at least 1 member. The success in Waterford was seen as a major success as the Beresford family who had ruled the seat for generations had to withdraw as they realised they were losing. This showed the support for the pro-emancipation candidates and how the 40-sh freeholders were uprising against their landlords. O'Connell was pleasantly surprised and after some hesitation he found himself standing for the Clare by-election. He hoped that the 40-sh freeholders would continue the revolt and support him. He was elected five days after the poll had started. The triumph of O'Connell convinced the Roman Catholics of their strength. They had rose up against the establishment and had proven that they were a force to be recognized with. Short Answer: The 40-sh freeholders revolt was a pleasant surprise for O'Connell. ...read more.