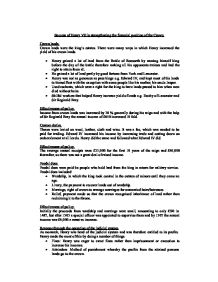 Success of Henry VII in strengthening the financial position of the Crown.

Success of Henry VII in strengthening the financial position of the Crown. Crown lands. Crown lands were the king's estates. There were many ways in which Henry increased the yield of his crown lands. * Henry gained a lot of land from the Battle of Bosworth by naming himself king before the day of the battle therefore making all his opponents traitors and had the right to attain them all. * He gained a lot of land partly by good fortune from York and Lancaster. * Henry was not as generous as pass kings e.g. Edward IV, and kept most of his lands to himself but with the exception with some people like his mother, his uncle Jasper. * Used escheats, which were a right for the king to have lands passed to him when men died without heirs. ...read more.

* Livery, the payment to recover lands out of wardship. * Marriage, right of crown to arrange marriages for unmarried heirs/heiresses. * Relief, payment made so that the crown recognised inheritance of land rather then reclaiming it to the throne. Effectiveness of policy. Initially the proceeds from wardship and marriage were small, amounting to only �350 in 1487, but after 1503 a special officer was appointed to supervise them and by 1507 the annual income was �6,000 a massive increase. Revenue through the operation of the judicial system. As monarch, Henry was head of the judicial system and was therefore entitled to its profits. Henry made the most of this by doing a number of things. * Fines: Henry was eager to exact fines rather then imprisonment or execution to increase his incomes. * Attainders: Method of punishment whereby the profits from the attained persons lands go to the crown. ...read more.

Effectiveness of policy. It was effective in the way it was quite successful as Henry had only asked modest amounts of money from his subjects and had always repaid back, probably to lessen the risk of rebellion of some sort. Feudal obligations. As feudal overlord Henry could demand money from his subjects for special occasions e.g. the knighting of his eldest son, marriage of his eldest daughter. Effectiveness of policy. Anyone who earned more then �40 p.a. had to become a knight, along with the financial burdens that it entailed in military service. So this would have made a lot of money to add to the kings income from the financial burdens. Clerical dues and other income from the church. Convocation usually offered money when the king was requesting it from the parliament grant e.g. in 1489 when �25,000 was raised for the French war. Effectiveness of policy. Due to a rash of deaths amongst the bishops in the last years of the reign, Henry received over �6,000 per annum in this way. ...read more.