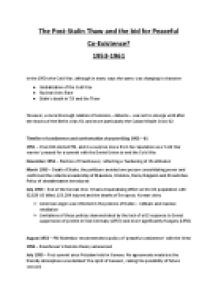 Superpower Relations and the Thaw in the Cold War

ï»¿The Post-Stalin Thaw and the bid for Peaceful Co-Existence? 1953-1961 In the 1950s the Cold War, although in many ways the same, was changing in character * Globalization of the Cold War * Nuclear Arms Race * Stalin’s death in ’53 and the Thaw However, a more thorough relation of tensions – détente – was not to emerge until after the shocks of the Berlin crisis ’61 and more particularly the Cuban Missile Crisis ‘62 Timeline of coexistence and confrontation characterising 1953 – 61 1951 – Churchill elected PM, and in a surprise move from his reputation as a ‘Cold War warrior’ pressed for a summit with the Soviet Union to end the Cold War. November 1952 – Election of Eisenhower, reflecting a ‘hardening of US attitudes’ March 1953 – Death of Stalin, the politburo avoided one person consolidating power and confirmed the collective leadership of Malenkov, Molotov, Beria, Bulganin and Khrushchev. Policy of destalinisation introduced July 1953 – End of the Korean War. It had a traumatising effect on the US population with 32,629 US killed, 103,284 injured and the deaths of 3m aprox. Korean civies. * American anger was reflected in the policies of Dulles – rollback and massive retaliation * Limitations of these policies demonstrated by the lack of a US response to Soviet suppression of protest in East Germany (1953) and more significantly Hungary (1956) August 1953 – PM Malenkov recommended a policy of ‘peaceful coexistence’ with the West 1954 – Eisenhower’s Domino theory announced July 1955 – First summit since Potsdam held in Geneva. No agreements made but the friendly atmosphere was dubbed ‘the spirit of Geneva’, raising the possibility of future concord. February 1956 – Khrushchev’s ‘secret speech’ dramatically extended destalinisation by condemning Stalin’s rule in a closed meeting of the Communist Party. 1957 – Eisenhower Doctrine. In conjunction with Domino Theory, ‘Roll Back’ and ‘Massive Retaliation’ extended US military alliances world-wide in an attempt to firmly contain communism. ...read more.

* ?New Look? was hard-line approach to foreign policy and won much support in the US * Dulles (secretary of state) talked of ?rolling back? communism and the ?liberation? of Eastern Europe. Based on ?massive retaliation? and the policy of brinkmanship * Dulles ? ?the ability to get to the verge without getting into war is the necessary art. If you cannot master it, you inevitably get into war. If you try to run away from it, if you are scared to go to the brink, you are lost? * In private however, Eisenhower and Dulles were cautious and understood the destructive nature of nuclear weapons. Their policy was based on a reasoned approach to the situation they faced. * Eisenhower was conscious of the power and influence exerted by the military-industrial complex and was aware that economic resources that could improve living standards were being diverted into arms production. * The US military, which had undergone massive expansion during the Korean War was in danger of distorting and unbalancing the US economy. With the growth of expensive nuclear missiles, an agreement with the USSR appeared necessary. Therefore, from the early 1950s, the Governments of both the USA and USSR were facing the same pressures. Pushing them towards reaching an accommodation. Economic Pressures * The desire to reduce military spending to free resources for other sectors of the economy. * Domestic reforms and living standards were held back by pouring money into an unproductive military sector. * In the USSR aprox 1/3 of the economy was geared to the military sector * In the USA over 12% of GNP was spent on armaments ? Eisenhower?s ?New Look? was designed in part to save money of conventional arms by relying on fewer but more powerful nuclear weapons * Neither country could sustain huge military costs without long-term damage to its economy Avoiding Nuclear War * Both Superpowers had the A b**b (1949) ...read more.

* Mao saw an opportunity to ?liberate Taiwan?, ordering the bombing of the occupied offshore islands beginning in September 1954. * The USA considered nuclear weapons, although Eisenhower followed a diplomatic path by enacting the Formosa Resolution in January 1955. Pledging the American defence of Taiwan in the case of a communist invasion, but left vague whether the United States would intervene to protect the islands off China?s mainland. * Passage of the resolution produced a series of indirect negotiations between the US and China (in which the Chinese agreed to cease bombing Quemoy and Matsu), and the First Taiwan Straits Crisis ended in May 1955. * The United States and Taiwan entered into a mutual security pact, strengthening the connection between the two nations and making Mao?s ?liberation? efforts more difficult to achieve. * By 1958, however, tension in the Taiwan Straits resumed. Concerned with increased American involvement in Taiwan and frustrated with the failure of his more moderate policy, Mao assumed a hard-line approach. * Ordering the bombing of Quemoy in August 1958, grounded in the belief that an international crisis could benefit the Chinese. Paint the US as imperialist aggressors, and demonstrating China?s independence from the dominant communist power of the era - the Soviet Union. * Eisenhower reiterated America?s resolve to defend Taiwan (and the offshore islands even though they weren?t explicitly listed in the Formosa Resolution), both in rhetoric and by his decision to send a large naval contingent to the Taiwan Straits. Eisenhower?s forceful stance and Soviet pressure convinced the Chinese to end the bombing and seek a peaceful settlement with the Nationalist government in October 1958. * US had made a comprehensive commitment to Taiwan. PRC was angered at the timidity of the USSR. Strained superpower relations between USA, USSR and China Assessment * Between 1956 and 1962 events in Hungary, Berlin, (Taiwan) and Cuba revealed both the potential dangers of crisis and confrontation, the superficial nature of the ?thaw? and laid done rules each side was prepared to adopt in order to stabilise relations. ...read more.