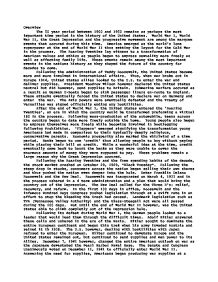 The 50 year period between 1900 and 1950 remains as perhaps the most important time period in the history of the United States.

Overview The 50 year period between 1900 and 1950 remains as perhaps the most important time period in the history of the United States. World War I, World War II, the Great Depression and the progressive movement are among the marquee events that occured during this time. America emerged as the world's lone superpower at the end of World War II thus setting the layout for the Cold War in the process. The Roaring Twenties lay witness to a transformation of American values and ethics as people began to express sexuality more freely as well as effecting family life. These events remain among the most important events in the nations history as they shaped the future of the country for decades to come. Following the administration of Teddy Roosevelt, the United States became more and more involved in international affairs. Thus, when war broke out in Europe 1914, United States allies looked to the U.S. to enter the war and deliver supplies. President Woodrow Wilson however declared the United States neutral but did however, send supplies to Britain. Submarine warfare occured as a result as German U-Boats began to sink passenger liners en-route to England. These attacks eventually forced the United States to declare war on Germany and enter the war. The Axis powers were eventually defeated and the Treaty of Versailles was signed officially ending any hostilities. After the end of World War I, the United States entered the 'Roaring Twenties', an era in which the country would be transformed preforming a virtual 180 in the process. Following mass-production of the automobile, teens across the country began to date more freely outside the home. Young people also began to express themselves more freely while becoming involved in bootlegging following Prohibition. 'Flappers' emerged signifying the transformation young Americans had made in comparison to their typically deeply religious, conservative parents. Economic prosperity also marked the whirlwind of a time period. ...read more.

John T. Scopes- A high-school biology teacher that was charged with violating a Tennessee statute that prohibited the teaching of evolution. One of the most famous court battles in recent history resulted in July 1925. Was found guilty, although the conviction was later overturned. Terms Truman Doctrine- Claimed that the United States must support free peoples who were resisting Communist domination. The first implementation of the doctrine provided aid to Greece and Turkey to the amount of $400 million to prevent Communist takeover. Iron Curtain- "The political and ideological barrier that stood between the Soviet bloc and western Europe after World War II." (Reader's Digest Encyclopedic Dictionary). A barrier that prevented free exchange and communication. Point Four Program- A foreign aid program of President Harry S. Truman. It established the principle of United States interest in the economic growth of developing nations. The program was designed to promote improved agricultural production and technological progress in underdeveloped areas. North Atlantic Treaty Organization (NATO)- A military alliance consisting of the United States, the United Kingdom, Canada, and 23 other countries. Formed in 1949 to discourage an attack by the Soviet Union on the non-communist nations of Western Europe. Was also established to keep the peace among former enemies in Western Europe. NATO members agreed to treat an attack on a membering nation as an attack on themselves. Cold War- Term used to describe the rivalry that developed primarily between the Soviet Union and the United States but more specifically the Western bloc, led by the United States and the Eastern bloc, led by the Soviet Union. The Cold War was particilarly characterized by mutual suspicion and misunderstanding between the two nations. The United States accused the Soviet Union of seeking to expand Communism throughout the world. The Soviets, meanwhile, charged the United States with practicing imperialism and with attempting to stop revolutionary activity in other countries. ...read more.

The automobile as well as literature of the time surely effected American values. The teachings of Sigmung Freud revealed how s*x and sexuality were essential to relationships even prior to marriage and thus gave people an excuse to rebel and do as they wished. What weakness existed beneath the surface of the general 1920s prosperity, and how did these weaknesses help cause the Great Depression? Underneath the prosperity of the 1920s was the weakness of credit. Although seemingly genius at the time, banks allowed spending too freely and thus dug themselves (banks) into holes they could not climb out. When business' came calling to the banks, the banks were unable to pay the various business' off and thus were forced to close. The alarming rate at which banks closed caused stock holders to sell their shares and thus caused stocks to plummet. The panic of consumers everywhere led to the stock crash and the Great Depression. Was American entry into World War II inevitable? American entry into World War II was inevitable. The U.S. would have entered the War, albeit a later time, but still would have done so. Britain and the rest of the U.S. allies were falling quickly to the n**i war machine when Pearl Harbor rolled around and it was just a matter of time until U.S. entry was needed or Europe would be taken over by Hitler. What effects did World War II have on the American economy? World War II allowed the American economy to prosper as it had during the Roaring Twenties, even moreso this time around however. The enormous demand for war time production opened up jobs across the country and allowed those that had been unemployed to find employment and even allowed women to work regularly on par with men. Prior to World War II, America was in the Depression, after however, the war time production allowed the country to climb out of the economic hole. America thus prospered economically and never looked back. ...read more.