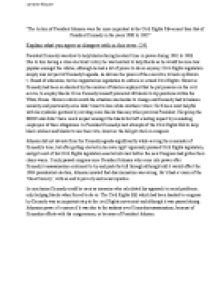 The Action of President Johnson were far more important to the Civil Rights Movement than that of President Kennedy in the years 1960 to 1965 Explain what you agree or disagree with in this view. (24)

﻿Lorraine Klauser ?The Action of President Johnson were far more important to the Civil Rights Movement than that of President Kennedy in the years 1960 to 1965? Explain what you agree or disagree with in this view. (24) President Kennedy was slow to help blacks during his short time in power during 1961 to 1963. Due to him having a close electoral victory he was hesitant to help blacks as he would become less popular amongst the whites, although he had a lot of power to do so anyway. ...read more.

Even Kennedy himself promoted 40 blacks to top positions within the White House. However down south the situation was harder to change and Kennedy had to balance morality and practicality as he didn?t want to lose white southern voters. He?d been most helpful with his symbolic gestures by inviting more blacks than any other previous President. His group the EEOC also didn?t have much impact amongst the blacks but left a lasting impact by reminding employers of their obligations. In President Kennedys last attempts of the Civil Rights Bill to help black workers and blacks to use their vote; however the bill got stuck in congress. ...read more.

He?d had a vision of the ?Great Society?, with an end to poverty and racial injustice. In conclusion Kennedy could be seen as someone who calculated his approach to racial problems, only helping blacks when forced to do so. The Civil Rights Bill which had been handed to congress by Kennedy was an important step to the civil Rights movement and although it was passed during Johnsons power it?s unsure if it was due to the sadness over Kennedys assassination, because of Kennedys efforts with the congressmen, or because of President Johnson. ...read more.