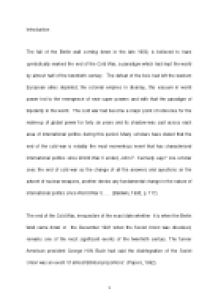 ﻿Introduction The fall of the Berlin wall coming down in the late 1989, is believed to have symbolically marked the end of the Cold War, a paradigm which had kept the world by almost half of the twentieth century. The defeat of the Axis had left the western European allies depleted; the colonial empires in disarray, this vacuum in world power led to the emergence of new super powers and with that the paradigm of bipolarity in the world. The cold war had become a major point of reference for the make-up of global power for forty six years and its shadow was cast across each area of international politics during this period. Many scholars have stated that the end of the cold war is notably the most momentous event that has characterised international politics since World War II ended, John F. Kennedy says? one scholar sees the end of cold war as the change of all the answers and questions on the advent of nuclear weapons, another denies any fundamental change in the nature of international politics since World War II?? (Baldwin, 1995, p. 117). The end of the Cold War, irrespective of the exact date whether it is when the Berlin Wall came down or the December 1991 when the Soviet Union was dissolved, remains one of the most significant events of the twentieth century. The former American president George H.W Bush had said the disintegration of the Soviet Union was an event ?of almost Biblical proportions?. (Papers, 1992). The aim of this essay is to evaluate if the end of the Cold war is a useful concept in explaining international politics .In doing this, this essay will briefly outline the theories and development of International politics, the Cold war and what the international system was like before the end of the Cold War. Secondly, outline and analyse the international system after the Cold war and events that shaped the international system since then. ...read more.

It was believed that an invasion of Cuba by the US would cause the Soviets to also invade Berlin, but the reaction by the White house from the Soviets after the Cuba naval blockage did not materialise as the Soviets refused to intensify the conflict. Fortunately the deadlocked made the two superpowers to reconsider their actions to prevent an escalation into a nuclear war. One of the major trends in the international political system during the Cold War was the pre-eminence of military power .Both super powers kept trying to outdo each other?s military might. The Soviet Union were able to consolidate a second strike capability in the 1970s achieving the same quantity of military power as the United States. This was however seen by the US as the acquisition of nuclear warheads making both sides to have an equal 25,000 each on the two sides, while also possessing same types of delivery systems. This caused a situation of mutual susceptibility as a result of the increase of nuclear weaponry. But as the nuclear age progressed, there was a loss in the meaning of balance of military power as the understanding of economic power increased with the reduction of military power (Zimmermann, 2003, p. 157). Another dynamics of the cold war on the international system was that new economic powers also arose in Europe and japan which showed economic power becoming a significant factor international politics which was brought about by the coming of increasing economic interdependence in the 1960s.The economic recovery of Europe and japan saw a great turnaround with the Marshall plan which brought a fast reconstruction of the economies of Europe from the 1950s and 1960s.Japan also received similar economic aid and which gave it an unparalled boosting in two decades. Both Europe and japan had made gains from the nuclear deterrent. Economically, japan and Europe had gained significance as to the Soviet Union. ...read more.

Obviously the reinforcing significant of international economics made international politics to be defined in a new framework that puts global and local factors in relation to each other. The rise of global complex relations of state and non-state actors has given a boost to the various transnational financial activities, one can see the formation of three trading bloc that is hinged on the dollar in the North and South America, the yen in the Asia Pacific and the Euro in Europe as different to the Cold War era, as local and regional factors have taken predominant role. International Politics has become multi-layered: post-modern, modern and pre-modern societies co-exist and are intricately interconnected. The new changes in the international system have seen the liberalist views also taking a prominent role in the explanation of events in international politics. In conclusion, the single phrase that best describes the present world order in spite of its current confusion is the ?post-Cold War era or the end of the Cold War. It gets the merit of grounding our understanding of international politics in the great changes that have occurred since after 1989-1991 .The major difference between previous global wars and the Cold War was that earlier wars(except the bombings of Hiroshima) were all fought with the conventional weapons. The destruction by nuclear weapons by obvious implications far outweighs any conventional weapon and if the stability of the Cold War had ever been altered, attempts at composition history of international politics would probably never have happened. Had the Cold War ever turned into a hot war, it would have been the war to end all wars, plunging the entire world into a nuclear catastrophe of unprecedented magnitude. It is therefore the beginning and the end of that war that has reshaped and reconceptualised the events in international politics having held sway for half of the twentieth century. The End of the Cold War has helped to avoid a language that suggests a total divorce from the past and acknowledging that the events of September 11, 2001 did not bring in a completely new era. ...read more.