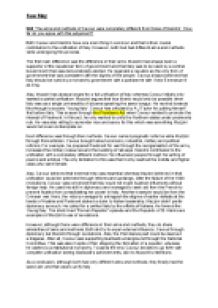 The aims and methods of Cavour were completely different from those of Mazzini. How far do you agree with this judgement?

﻿Sue May S04 ?The aims and methods of Cavour were completely different from those of Mazzini.? How far do you agree with this judgement? Both Cavour and Mazzini have one main thing in common and that is their crucial contribution to the unification of Italy. However, both had had different aims and methods while undergoing this process. The first main difference was the difference in their aims. Mazzini had always been a supporter of the republican form of government and that Italy was to be ruled by a central Government that was democratically elected. He regarded a republic as the only form of government that was consistent with the dignity of the people. Cavour always believed that Italy should be ruled by a monarchy government with a parliament with Victor Emmanuel II as king. ...read more.

In this act, he only wanted to unify the Northern states under piedmonts rule. He was also willing to surrender nice and savoy for this which was something Mazzini would not even contemplate on. Next difference was through their methods. Cavour carried pragmatic reforms while Mazzini through Romanticism. Cavour brought about economic, industrial, military and political reforms. For example, he prepared Piedmont for war through the reorganisation of the army, increased the military resources and the building of railways. Mazzini contributed to the unification with a completely different method. He influenced people through his writing of poems and articles. The only limitation to this was that it only reached the middle and higher class who were literate. ...read more.

Mazzini didn?t prefer diplomacy as much. He called for a unified Italy by the efforts of Italians. He formed the Young Italy. The short-lived ?Roman Republic? episode and the Republic of St. Marks are examples of Mazzini?s use of revolutions. However, although there were difference in their aims and methods, they do share similarities of aims and methods. Both did try to expel external influence, Cavour through diplomacy but Mazzini through revolutions. Also, the Plombieres pact could be deemed a disguise. After all, Cavour was supporting Garibaldi underground through the National Committee. This was also in spite of him stopping the formation of a republic, whereas he wanted a constitutional monarchy. Towards the end, Cavour decided to go forth with complete unification seeing Garibaldi?s achievements, akin to Mazzini?s intentions. As a conclusion, although both had very different aims and methods, they finally had the same aim and that was to unify Italy. ...read more.