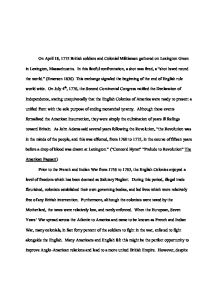 On April 18, 1775 British soldiers and Colonial Militiamen gathered on Lexington Green in Lexington, Massachusetts. In this fateful confrontation, a shot was fired, a "shot heard round the world." (Emerson 1836) This exchange signaled the beginning of the end of English rule world wide. On July 4th, 1776, the Second Continental Congress ratified the Declaration of Independence, stating unequivocally that the English Colonies of America were ready to present a unified front with the sole purpose of ending monarchal tyranny. Although these events formalized the American Insurrection, they were simply the culmination of years ill feelings toward Britain. As John Adams said several years following the Revolution, "the Revolution was in the minds of the people, and this was effected, from 1760 to 1775, in the course of fifteen years before a drop of blood was drawn at Lexington." ("Concord Hymn" "Prelude to Revolution" The American Pageant) Prior to the French and Indian War from 1756 to 1763, the English Colonies enjoyed a level of freedom which has been deemed as Salutary Neglect. During this period, illegal trade flourished, colonists established their own governing bodies, and led lives which were relatively free of any British intervention. Furthermore, although the colonists were taxed by the Motherland, the taxes were relatively low, and rarely enforced. When the European, Seven Years' War spread across the Atlantic to America and came to be known as French and Indian War, many colonials, in fact forty percent of the soldiers to fight in the war, enlisted to fight alongside the English. Many Americans and English felt this might be the perfect opportunity to improve Anglo-American relations and lead to a more united British Empire. However, despite what appeared to be a greater level of unity, a number of English actions quickly struck a deep riff between the Motherland and her independently minded children. (The American Pageant "The Colonies and Mother Country at the Close of the French and Indian War") ...read more.

Although it failed at it's intended goal, the Stamp Act Congress did succeed in bringing together, freely, delegations from all over the colonies and helped to tear down some of the walls which separated the rival colonies and had previously prevented such gatherings. The Congress represented, "one more halting step toward intercolonial unity. More effective than the congress was the widespread adoption of non-importation agreements against British goods." (Bailey 125) Another step toward a united America was shown in the everyday actions of the American people. They began to wear Colonial made wool clothing and eating lamb was discouraged in order to allow, "wool bearing," sheep to grow and have their wool harvested. Actions such as the formation of the Stamp Act Congress, non-importation agreements, and actions such as wearing homemade garments unified the colonies like never before, and all in the name of stopping English tyranny. ("Prelude to Revolution" The American Pageant) Although the majority of Americans took a position of passive resistance against the English, certain groups such as the Sons of Liberty, and the Daughters of Liberty partook in active and violent resistance. They took enforcement of non-importation into their own hands and would commonly tar and feather violators of such agreements. Also, English officials and their families were tormented, houses were ransacked, workers beaten, and tax collectors hanged. By the time the law went into effect, there wasn't a single tax collector left to enforce the tax, the lucky ones had resigned, the unlucky ones were dead. The tax had effectively been nullified and in an unprecedented move, the English recognized the futility of their actions and repealed the Stamp Tax before a single cent had been collected. In a desperate attempt to save face Parliament passed the Declaratory Act which stated that Parliament was empowered with the ability to, "bind [the Colonies] in all cases whatsoever." (Bailey 127) When word reached America the Colonists responded with joy, in New York a large statue of King George III was erected, in due time it would be melted down and used for bullets. ...read more.

Here it was decided that America would pursue a return to life as it was prior to heavy English taxation. The Congress drew up a number of documents including several appeals to both King George III and the British people as well as a Declaration of Rights. The most important action of the Congress was the establishment of The Association. It proclaimed a boycott of British goods, not allowing for importion, exportion, or consumption of all things English. The Congress was hoping to receive a favorable response to it's petitions and was to reconvene in May of 1775 if its requests were denied. Parliament rejected the American pleas. ("Prelude to Revolution" The American Pageant "The Revolutionary War") By this time it appeared that a conflict of arms was inevitable. All across America agents of the King workers were tarred and feathered or even killed. Muskets and cannon were being hoarded and manufactured while militiamen were openly drilling in fields. It wasn't even unheard of to have soldiers training in the Boston Commons or what would come to be known as New York's Central Park. On April 18th, 1775 the English commander in Boston sent troops to Lexington where they were supposed to disperse the militia and then to continue on toward Concord to do the same. Upon arriving at Lexington Green, the two sides squared off, a shot whose origin remains a mystery sounded, the bloody backs shot and either wounded or killed a dozen, "minutemen." They then proceeded on toward Concord where they met with fierce resistance and were forced to retreat. They returned to Boston to lick their wounds and prepare for further inevitable fighting. "Give me liberty or give me death!" bellowed Patrick Henry on March 15th, 1775. Little less than a month later Colonial Militiamen began a long fight by taking the later to ensure the former. Decades of anger and frustration had reached their boiling point as the road to war came to an end and the road to liberty began. ("Conflict and Revolution" "Give Me Liberty or Give Me Death" The American Pageant "The Revolutionary War") ...read more.