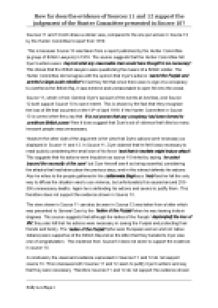 The Amritsar Massacre. How far does the evidence of Sources 11 and 12 support the judgement of the Hunter Committee presented in Source 10?

If the Hunter Committee in Source 10 is correct when they say that ?it is not proven that any conspiracy had been formed to overthrow British power.? then it does suggest that Dyer?s act of violence that killed so many innocent people was unnecessary. However the other side of the argument is the view that Dyers actions were necessary as displayed in Source 11 and 12. In Source 11, Dyer claimed that he felt it was necessary to react quickly considering the small size of his force ?and that to hesitate might induce attack?. This suggests that his actions were impulsive as source 10 hinted by saying ?he acted beyond the necessity of the case? but Dyer himself saw it as being essential, considering the attacks that had taken place the previous days, and in this extract defends his actions. ...read more.

This source suggests that although the ladies of the Punjab ?deplore[ed] the loss of life?; they also felt that his actions were necessary in saving the Punjab and protecting their friends and family. The ?ladies of the Punjab? (who were European women and not native Indians) were supportive of the British Raj and so the letter that they handed to Dyer was one of congratulation. This evidence from Source12 does not seem to support the evidence in source 10. In conclusion, the views and evidence expressed in Sources 11 and 12 do not support source 10. This is because both Sources 11 and 12 seem to justify Dyer?s actions and say that they were necessary. Therefore Sources 11 and 12 do not support the evidence shown in Source 10. ________________ Holly LowPage ...read more.