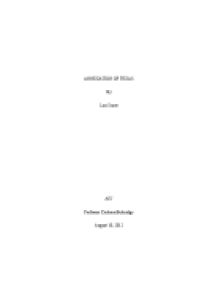 The Annexation of Texas

﻿ANNEXATION OF TEXAS By Lori Snow AIU Professor KeohaneBurbridge August 10, 2012 ANNEXATION OF TEXAS Abstract Before the Civil War, there was a war outside of the United States that was going on. Spain claimed all the territories in the south, which included Texas, Arizona, New Mexico and California. Few Spaniards actually settled in these states. Independence is what made Texas a state that it is today. ANNEXATION OF TEXAS Texas?s Annexation Spain claimed all the territories southwest in the 1500?s. (This included Florida). This was done all during the colonization of North American by European countries. These areas were Texas, Arizona, New Mexico and California. Very little Spaniards settled in these areas and by the 1820?s there were only thirty-five hundred non-Indian that were living in the whole area. (www.encyclopedia.com). Spain?s heart of the American empire was Mexico City. During that time, Spain had outlawed any commerce with the Americans. Mexico rebelled and won their independence in 1821. After Mexico?s independence, Mexico wanted to increase the population so they encouraged American immigrants to move to Texas. ...read more.

The President of Texas was President Mirabeau B. Lamar, (1838-1841), he opposed annexation and did not want to open any window for annexation. One of the reasons the United States did not want it is because it went against the scruples of the Constitution and they were afraid of aggravating their political relationship with Mexico and afraid of war against Mexico. (www.encyclopedia.com.) But what influence it the most was that Texas was a slave state with its eastern portion heavily committed to cotton cultivation. The annexation would upset the delicate balance of the thirteen slave states and the thirteen non-slave states currently making up the country. (www.tshaonline.org.) The most perception of the United States people was that the Texas population was largely consistent of undesirables. A big burden on Texas was the debt that they inherited because they had no industry. With a new president, Samuel Houston, he implemented settlement policies so that it would entice immigration from the United States and Europe. He was hoping that this would bring economic growth to a very small minority. ...read more.

Both peoples of the United States and The Texas Republic urged the government of Texas to accept the offer by the United States. One benefit was that even though it took ten years to be annexed, it was a blessing for Texas because the United States government agreed that Texas ANNEXATION OF TEXAS would retain all of its public lands and that the United States would pay five million dollars to ease Texas?s debts. Upon the annexation, the United States went to war with Mexico. The victorious America came in control of the southwest and of California under the Treaty of Guadalupe in 1846. Unfortunately, the slave population grew tremendously which continued throughout the twentieth century. Besides the cotton trade, Texas became very prominent in the cattle industry and then later in the oil field. Most Americans felt that expansion would come in time but without any international war. They also felt that when the time was right that provinces would fall right into place into the American hands. As time went by, the American people got impatient and headed west on their own. They faced many hardships along the way; they struggled through hard terrain, hard weather and sickness. Nevertheless, they conquered. ...read more.