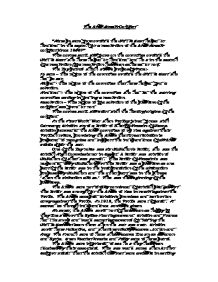 The Arab-Israeli Conflict "Have powers from outside the Middle East helped or hindered in the search for a resolution to the Arab-Israeli conflict since 1948?" This coursework will focus on the countries outside the Middle East who have helped or hindered and how in the search of a resolution (if a resolution has been achieved or not). The key points which will be purposeful are:- Powers - this refers to the countries outside the Middle East who had power. Helped - this refers to the countries that have helped find a solution. Hindered - this refers to the countries who had led the warring countries astray in finding a resolution. Resolution - This refers to if a solution to the problem of the conflict was found or not. This coursework will start with the history/origins of the conflict. In the First World War when Turkey joined forces with Germany, Britain wrote a letter to Sheriff Hussein of Mecca. Britain persuaded the Arab countries to up rise against their Turkish rulers, promising the Arabs that Great Britain is prepared to recognise and support the independence of all Arab states after the war. One of the key roles was sir McMahon's letter, who was the British High Commissioner in Egypt. A letter was written to McMahon of what was wanted. This letter of Hussein's was responded to by McMahon, but this letter was a problem as one part of the letter was in the interpretation of the alteration proposed by McMahon and the other part was in the phrase 'when the situation allows.' This was the beginning of the problems. The Arabs were not totally convinced of British pledges but this letter was enough for the Arabs to rise in revolt against the Turks. The Arabs accepted Britain's promises and set out an army against the Turks. In 1918, the Turks were defeated. It seemed as though independence would be given. ...read more.

The USSR also said that it was thinking of 'flattening' Israel. After many threats which included monetary and military threats, Britain, France and Israel were all strained to leave. As a result a UN emergency force was set-up on the border between Egypt and Israel to keep peace. The USA, USSR and the UN played a fundamental role in this war as they were trying to help find a resolution and make peace between the two participants. Britain and France on the other hand, were only using Israel in between to get the Suez Canal back. Israel took the offer up and used it as a chance of invasion. Britain and France had hindered the progress of Israel and the Arab states for their own reasons. The UN had also played a worthy role in demanding the British, French and Israeli troops out of Egypt but could not have done it without the individual's help of USA and USSR. Nasser, as a result, became a leading Arab figure with the help of the USSR and used this position to plan another war in 1967. In 1966, the army took over the government and took a forceful approach towards Israel, in Syria; its troops were concerted on the Golan Heights. On the 16 of May Nasser ordered the UN troops who were situated on the borders of Egypt to have Egyptian territory, Nasser also closed the Gulf of Aqaba to Israeli ships. Syria decreed war against Israel, Jordan and Egypt offered help and began to join forces. Israel however, was not prejudiced by fright, especially due to the assurances from America as to there would be no 'restraint'. On 5 May Israel attacked on the Arab states even before the Arab sates attacked. This was an advanced attack in self-defence which was known as being pre-emptive. The Israelis taking full control of the skies on the first day quickly and promptly defeated the Arab countries, occupied the Sinai penisula, Gaza Strip and the West Bank. ...read more.

The Americans were not consulted and so were very angry. Although the Israeli Army successfully seized the Sinai but the American government insisted that the Israelis should withdraw. In 1967 Israel went to war against Egypt, Syria and Jordan. Having learnt a lesson previously, the Israelis only attacked when some of the Americans. When the Israelis were shocked with a surprise attack by the Egyptians, USA airlifted emergency supplies of arms to Israel. This shows that Israel was given full support to by the USA. On the other hand, the USSR provided support for the Arab States; in return the Soviet used Egyptian ports. However when Sadat come to power he expelled soviet advisor from his county in 1972 and moved closer to the USA. The Americans used their new relationship to bring about a peace deal between Israel and Egypt. Jimmy Carter brought Sadat and Begin together at camp David, where they agreed the details of a peace treaty. As a result American influence in Israel increased. In my opinion, Britain only took part in the conflict when it came to the Suez Canal, as this was the last British intervention in the conflict. Britain and France had obstructed the progress of peace for their own reasons and got Israel involved in the 1956 war. USA, on the other hand, hindered and helped in the search of a resolution, as in the war of 1973, when oil was used as a weapon, USA quickly sided with the Arab countries, thus hindered. However, the closer the events to the present day situation, USA managed for the two states to meet at camp David and came to an agreement, thus helped in the search of a resolution. The Soviet Union, provided help for the Arab countries in return for huge gifts of weaponry soviet naval ships used Egyptian ports, and Soviet exploration planes flew from Cairo airport. Thus the Soviet Union was behind a deal. Also providing either party, Arabs or Israelis with weapons was clearly a push factor of war between the two and creating extreme tense situations. ...read more.