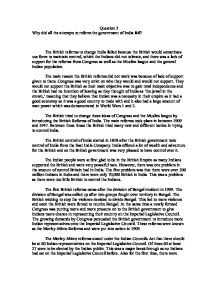 The British reforms to change India failed because the British would sometimes use force to maintain control, which the Indians did not tolerate, and there was a lack of support for the reforms from Congress as well as the Muslim league and the general In

Question 3 Why did all the attempts to reform the government of India fail? The British reforms to change India failed because the British would sometimes use force to maintain control, which the Indians did not tolerate, and there was a lack of support for the reforms from Congress as well as the Muslim league and the general Indian population. The main reason the British reforms did not work was because of lack of support given to them. Congress was very strict on who they would and would not support. They would not support the British as their main objective was to gain total independence and the British had no intention of leaving as they thought of India as 'the jewel in the crown,' meaning that they believe that Indian was a necessity in their empire as it had a good economy so it was a good country to trade with and it also had a large amount of man power which was demonstrated in World Wars 1 and 2. The British tried to change these ideas of Congress and the Muslim league by introducing the British Reforms of India. The main reforms took place in between 1909 and 1947. Between these times the British tried many new and different tactics in trying to control India. The British control of India started in 1858 after the British government took control of India from the East India Company. India offered a lot of wealth and adventure for the British and so the British government was very pleased to have control over it. The Indian people were at first glad to be in the British Empire as many Indians supported the British and were very peaceful race. However, there was one problem in the amount of control Britain had in India. The first problem was that there were over 300 million Indians in India and there were only 70,000 British in India. ...read more.

The most important weakness of the Government of India Act was that Congress did not accept it and believed that it did not go far enough and it was too little too late. Congress had become a major new movement in India and if the British wanted to make any changes in the way India was governed then they would have to be accepted by Congress. One of the terms of the Government of India Act was that the Montague-Chelmsford Reforms had to be reviewed. So, in 1927 a commission was led by Sir John Simon to see that the Montague-Chelmsford Reforms were working well. After the review had been finished, the Simon Commission advised there be a government for each individual province but there were to be no changes to the central government. Again there were many weaknesses in this act. The main reason that there were mass protests was that there were no Indians in the commission. Congress boycotted all meetings and a man called Jawaharlal Nehru introduced the idea of an Independent India. So, Congress rejected the recommendation of the Simon Commission and voted for a total dominion status in December 1929. This meant that India would govern herself. However, it was still part of the Commonwealth and inside the British Empire. A Declaration of Independence was drawn up and 21st January 1930 was proclaimed Independence Day. Gandhi found another way to prove that India was ungovernable. In March 1930 Gandhi embarked on his famous Salt March from Ahmedabad to Dandi. In this march Gandhi proved to all the British that India was not governable and that they stood united. Whilst many Indians were not co-operating with the Simon Commission one group of Indians were. The Untouchables were outside the Hindu cast system. They hoped that the Simon Commission would give them a better representation in the Indian society in the future. ...read more.

In Calcutta, Muslims attacked Hindu shops and Muslims were in turn, attacked by Hindu mobs; the death toll stood at 5000, with the British unable to contain the violence. Both Congress and the Muslim League were disgusted by the violence and agreed to join the Viceroy's interim government which was set up when Congress and the Muslim League refused to accept the Cabinet Mission's proposals. The Viceroy, Lord Waverly told the Prime Minister, Clement Atlee that the British would have to leave India because of the violent anti British protests. Atlee fixed a date So in conclusion the British attempts to try and reform the Government of India failed as there was a lack of support for the reforms from the Muslim League and Congress. Also because of the harsh acts put on to the Indian people the Indian population had also had little loyalty for the British. This is because the Indians thought that they would have been rewarded for their loyalty at the end of World War One but were instead put under harsh new rules which stated that they could be arrested with no charge. The British also had used force in the past to maintain control over the Indian community as seen in the Amritsar Massacre. These means of violence were a show of force on innocent civilians which many Indians did not forget. This further decreased the loyalty to the British. Soon the Indians just wanted the British to leave. The reforms did not stand a chance as they did not compromise with the Muslim League and Congress. All parties wanted different things to happen to India. The new Government of India Acts did give some power over to the Indians however; final say was always given to the British. That is why the entire attempt to reform India failed because Congress wanted a united India with a strong central government, the Muslim League wanted an independent Muslim state and Britain wanted to retain some power in India. ...read more.