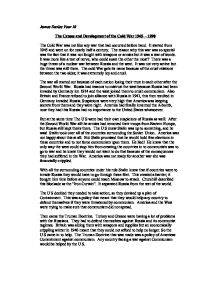 James Davies Year 10 The Causes and Development of the Cold War 1945 - 1990 The Cold War was not like any war that had occurred before hand. It started from 1945 and went on for nearly half a century. The reason why this war was so special was the fact that it was not fought with weapons or armies but it was a war of words. It was more like a test of nerve, who could scare the other the most? There was a huge threat of a nuclear war between Russia and the west. It was not very active but the threat was still there. The cold War gets its name because of the cruel relations between the two sides; it was extremely icy and cruel. The war all started out because of each nation losing their trust in each other after the Second World War. Russia had reasons to mistrust the west because Russia had been invaded by Germany inn 1914 and the west joined them to crush communism. Also Britain and France refused to join alliance with Russia in 1941, this then resulted in Germany invaded Russia. ...read more.

With all the surrounding countries under his rule Stalin knew that if countries were to invade Russia they would have to go through these first. This created a barrier; it bought him time before anyone could reach Moscow to attack. Churchill described this blockade as the "Iron Curtain". It separated Russia from the rest of the world. The U S decided they needed to take action, so they devised up a plan of Containment. This was a policy that meant that they would help any country to defend themselves if they were threatened by communism. America and the West were trying to make sure that communism did not spread. Then came the Truman Doctrine. Turkey and Greece were having a lot of problems with the Russians. They had to defend themselves against Russia and its communist regimes. Britain was aiding them with weapons and supplies but an economically crippling winter in 1946 meant that they could not afford to help no longer. So the U S came in to help. The Truman Doctrine that was made was a policy of Americas Commitment against communism. ...read more.

Russia was sending over nuclear missiles to Cuba. This meant that America was now under threat from nuclear attacks. But America quickly intervened they told Russia that if they were to send any more shipments over that they would take immediate action and destroy the vessels. Russia was not expecting that reply they assumed no action would take place. America set up blockades and arranged air strikes over the ocean; Khrushchev decided to deploy their ships back to Russia before another conflict took place. After seeing and hearing of these events taking place it must have been extremely frightening for the people in the world at this time. There was a huge threat of a nuclear war, which could have drastically destroyed the world completely. Each countries nerve was tested to the limit, but luckily no one decided to retaliate in a major way. With the U S inventing new plans and technology the west made it extremely hard for Russia and Stalin to take over the world and make it communist. The Cold war changed the world forever, no longer would wars be fought in trenches and battlefields. They would be fought with words, and with just one switch of a button the whole world could be destroyed. ...read more.