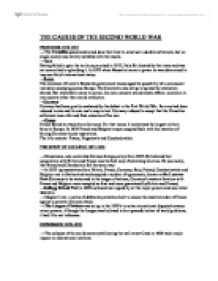 THE CAUSES OF THE SECOND WORLD WAR PROBLEMS 1919-1924 � The Versailles peacemakers had done their best to construct a durable settlement, but no single county was entirely satisfied with the results. � Italy Having failed to gain the territory promised in 1915, Italy felt cheated by the treaty and was not committed to upholding it. In 1922 when Mussolini came to power he was determined to improve Italy's international status. �Russia The existence of Lenin's Bolshevik government encouraged the possibility of a communist revolution sweeping across Europe. The Comintern was set up to spread the revolution abroad. But when Stalin came to power, his main concern was domestic affairs- socialism in one country rather than world revolution. �Germany Germany had been greatly weakened by the defeat in the First World War. Its army had been reduced in size and its over sea's empire lost. Germany refused to accept that the Versailles settlement was a fair and final outcome of the war. �France France feared an attack from Germany. For that reason it maintained the largest military force in Europe. In 1923 French and Belgian troops occupied Ruhr with the intention of forcing Germany to pay reparations. ...read more.

His main aim was getting lebensraum which could only be achieved by war. The first objectives were to takeover Czechoslovakia and Austria. �Sino-Japanese War started in July 19637 when Japanese forces took over large areas of China. Great Britain hoped Japan would be defeated. �The Anschlusssss (union) To unite Austria and Germany was forbidden by the treaties of Versailles and Saint Germain. Since 1934 the Austrian government had struggled to keep the Austrian Nazis under control. Schuschnigg, the Austrian Chancellor, got bullied and threatened into including n**i's into his government. He held a plebiscite on whether Austria should join Germany. This was an attempt to destroy Hitler's claim that most Austrians wanted union. Hitler demanded the cancellation of the plebiscite and threatened war. Schuschnigg resigned and Austrian Nazis took power and invited Hitler to send troops into Austria to preserve order. Hitler declared Austria was to be fully integrated into the Third Reich. Great Britain and France did nothing (France simply protested). THE PROBLEM OF CZECHOSLOVAKIA �Czechoslovakia- only about half of the 15 million population was Czech. 3.25 million Germans lived in Sudetenland and were the biggest minority. By 1938 the Sudeten German Party was demanding either home rule or union with Germany. ...read more.

The Poles, suspicious of Russian intentions, would not accept this issue. The Soviet Government maintained that this attitude convinced them that Britain and France were not in earnest in their negotiations. Stalin had no wish for an alliance with the west. � n**i-Soviet Pact From 1933 the USSR had occasionally made approaches to Germany suggesting better relations. But in 1939 Hitler realized that a deal with Stalin would strengthen his position, at least in the short term, and hoped it would frighten Britain and France into backing out of their guarantees to Poland. On 23 of August the n**i-Soviet non-aggression pact was signed. Secret clauses of the pact divided Poland and Eastern Europe into spheres of German and Russian influence. The way was now open for the German attack on Poland, which was planned to start 26 August. �Hitler was prepared to risk, but he didn't want a two-front war. Hitler was surprised and shaken by Mussolini's announcement that Italy intended to remain neutral, decided to postpone his invasion until 1 September. On the evening of the 31 August 1939 Germany claimed that one of its wireless stations near the Polish border had been attacked y the Poles. This claim, totally fabricated, was used as the excuse for war. 1 September German troops invaded Poland. 3 September Britain and France declared war (after an ultimatum was sent to Germany, but no reply was received). ...read more.