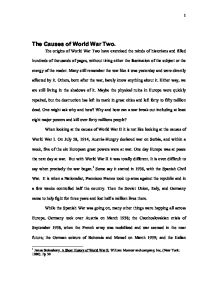 The Causes of World War Two.

The Causes of World War Two. The origins of World War Two have exercised the minds of historians and filled hundreds of thousands of pages, without tiring either the fascination of the subject or the energy of the reader. Many still remember the war like it was yesterday and were directly affected by it. Others, born after the war, barely know anything about it. Either way, we are still living in the shadows of it. Maybe the physical ruins in Europe were quickly repaired, but the destruction has left its mark in great cities and left forty to fifty million dead. One might ask why and how? Why and how can a war break out including at least eight major powers and kill over forty millions people? When looking at the causes of World War II it is not like looking at the causes of World War I. On July 28, 1914, Austria-Hungry declared war on Serbia, and within a week, five of the six European great powers were at war. One day Europe was at peace the next day at war. But with World War II it was totally different. It is even difficult to say when precisely the war began.1 Some say it started in 1936, with the Spanish Civil War. It is when a Nationalist, Francisco Franco took up arms against the republic and in a few weeks controlled half the country. Then the Soviet Union, Italy, and Germany came to help fight for three years and lost half a million lives there. ...read more.

Before this, he would not dare invade Poland because this would mean fighting France and Britain in the West, and the Soviet Union in the east, and this would be a nightmare. But once the treaty was signed, he could do what he wanted, and that is when he invaded Poland, which directly lead to Britain declaring war. While all of this was going on in Europe, Japan had many aggressions too that lead to the Second World War. In World War One Japan gained some German colonies in Asia and then 1931 occupied Manchuria the Northeast of China and then in 1937 invaded the rest of China. Japan like Germany was acquired by militarists who were similar to Nazis and had in mind to take over all of Asia.8 Now fully established as a world aggressor, Japan signed the Anti-Comintern Pact in 1936, allying themselves with Germany and Italy. In 1940, the Tripartite Pact replaced this pact and so Japan became a formal member of the infamous Axis alliance. Then Japan continued to invade China and Indochina and the United Stated responded by freezing Japanese assets and invoking and oil embargo. This made Japan very angry. Japan then destroyed much of the U.S. Navy in a surprise attack at Pearl Harbor, Hawaii in 1941. This threatened the United States security and brought the United States right into the war. Another cause of World War II would be the Great Depression. The Great Depression lasted from 1929 to 1939 and was brought along by the First World War along with the terms of peace that ended it.9 Production was very high and the economy was booming because of the extreme high demands of goods and services in World War I. ...read more.

Lenin had negated the military aid need with Germany in March 1921, and Stalin continued until Hitler wanted no part of assisting an enemy. Stalin had many of the same ideas as Hitler. He wanted to make the USSR into the dominant economy and military state. Russia's plan of imperialism began in 1939 with Poland and Finland a few months later and then attacked and reassumed control of the Baltic States. Finally Russia was officially forced into the war on June 22, 1941 when Germany attacked Russia. These are all decisions that Lenin made that helped cause World War II. He wanted to make the USSR a utopian global state and did everything that had to be done to achieve that goal even if it upset others countries which would cause a war. The last cause of World War II is Admiral Yamamoto Isoroku. He was one of the reasons for the United States to enter the war in the Pacific.13 If Isoroku would have made peace treaties or done things differently instead of bombing Pearl Harbor, the Unites States probably would not have gone to war in the Pacific. When one looks back on the causes of the war it is obvious that it was an end product of unresolved economic clashes, diplomatic squabbles and plotting, and unsound conception of security. As one can clearly see this was a war of many causes. It didn't happen over night it was a mixture of many irritated countries, with many problems. War is a terrible thing, but when one country threatens another country politically, economically, or socially, sometimes there is no other alternative, and it might even be the best solution. ...read more.