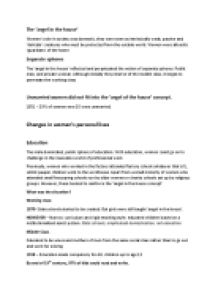 The changing position of women and the suffrage question

﻿The ?angel in the house? Women?s role in society was domestic, they were seen as intrinsically weak, passive and ?delicate? creatures who must be protected from the outside world. Women were altruistic ?guardians? of the home. Separate spheres The ?angel in the house? reflected and perpetuated the notion of separate spheres. Public man, and private woman. Although initially the preserve of the middle class, it began to permeate the working class. Unmarried women did not fit into the ?angel of the house? concept. 1851 ? 29% of women over 20 were unmarried. Changes in women?s personal lives Education The male dominated, public sphere of education. With education, women could go on to challenge in the masculine world of professional work. Previously, women who worked in the factory attended factory school (whatever that is?), whilst pauper children went to the workhouse. Apart from a small minority of women who attended small fee-paying schools run by older women or charity schools set up by religious groups. However, these tended to reinforce the ?angel in the house concept?. What was the situation? Working class 1870- State schools started to be created. But girls were still taught ?angel in the house?. HOWEVER ? Narrow curriculum and rigid teaching style, educated children based on a institutionalised s****t system. State schools, emphasised domestication, not education. Middle Class Educated to be wives and mothers of men from the same social class rather than to go out and work for a living. 1918 ? Education made compulsory for ALL children up to age 13 By end of 19th century, 97% of kids could read and write. Work Two labour markets ? the working class and the middle class. Working class - Despite, ongoing technological changes and apart from a brief interlude in WW1, domestic service was the most common for working-class women. Textile factory work second. Developments Growth of banking and commerce, combined with the subsequent inventions of the typewriter and telephone, new opportunities were created for the ?white blouse? worker. ...read more.

The suffrage campaign Early suffragists ? restoration of old rights, rather than new privileges. After an attempt to exploit the legal loophole that women freeholders were allowed to vote, a judge ruled that ?every woman is personally incapable of voting?. Women saw their continued exclusion from the political sphere ? excluded from the reform acts of 1832. 1867 and 1864. Male non-property owners now enjoyed the vote, women property owners argued they should have representation in order to determine where their taxes were spent. ? no taxation without representation. Social reformers such as Florence Nightingale and Louisa Twining challenged the ?angel of the house? concept. They were examples of how women could contribute to politics. Women saw the vote as a vehicle for pushing for female social and economic reform. Women were challenging their traditional roles in society. And it scared the s**t out of the blokes. HOWEVER? Many anti?s were opposed to any expansion of the franchise. Asquith ? rule by ?an uneducated, politically inexperienced and irrational class?. Women were not capable of full citizenship because they were not available for the purposes of defence of the Empire. Furthermore, colonies would lose respect for Britain if women were in control. They are guided by their wombs and prone to hysteria, they were intellectually inferior. Women were weak and passive and ol?blighty would be invaded. Women were seen to exert a more subtle form of control over national affairs through their roles as mothers and wives. Women were incapable of forming their own opinions, and because of their inferior qualities would vote in their own interests, not the public good. They might bring in temperance reform!! The case against the vote for women was based around the concept of female ?domesticity?. The perceived nature of women was deemed inadequate to enter the public world of politics. Women were expected to satisfy their roles within such a limited arena, whilst opportunities to engage in public affairs was limited to religious, educational and charity work. ...read more.

December 1916 ? David Lloyd George replaced Asquith. Important contribution of women to war effort and cessation of WSPU militancy politically allowed MPs to support female enfranchisement. The international scene was changing ? Norway, Canada, New-Zealand among others had already granted votes to women. The political fear that the enfranchisement of women would benefit one party over another had largely gone. The Labour Party Reaction Labour?s new constitution printed in 1918 made ?women? one of several affiliated groups. Yet the Labour Party was primarily set up to remove the inequalities of the ?working man?. Women were first to be made redundant in the squeeze on jobs. Yet the party did appoint a chief women organiser whose role was to increase the number of female voters. The Conservative Party Reaction The Conservative ?pragmatic? strain accepted the inevitability of women getting the vote and appreciated that the enfranchised female demographic was more likely to vote for the Conservatives. The Primrose league was affiliated with the party and formed an effective work force. Further Reforms ?attempts to level the playing field. 1919 s*x Disqualification Act gave women the right to enter the extensively male dominated public world of law and higher education. 1922 Married Women?s Maintenance Act financially supported single women ? addressed the patriarchal idea that women were property of men. 1922 Infanticide Act removed charge of murder for women who killed their infant child. 1923 Matrimonial Causes Act WOMEN ALLOWED DIVORCE ON SAME GROUNDS AS MEN 1923 Bastardy Act increased maintenance payments to single mothers. 1925 Guardianship of Infants Act women had same custody rights as fathers. 1925 Widows, Orphans and Old Age Contributory Pensions Act ? provided a pension for widows of insured men 1928 Equal Franchise Act ? GAVE THE VOTE TO MEN AND WOMEN TO EQUAL TERMS Although these acts went a long way in removing the legal obstacles to women entering the public sphere and addressed to some extent the ?angel in the house? concept. The opposition to an equal society remained socially, and institutionally strong. Women were by no means ?equal?. ...read more.