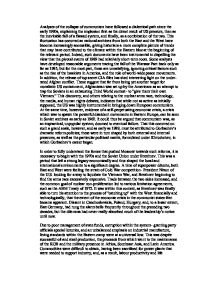 The Collapse of Communism in the USSR and Eastern Europe

Analyses of the collapse of communism have followed a dialectical path since the early 1990s, explaining the implosion first as the direct result of US pressure, then as the inevitable fall of a flawed system, and finally, as a combination of the two. This fluctuation has occurred as national archives from both the East and the West have become increasingly accessible, giving historians a more complete picture of trends that may have contributed to the climate within the Eastern bloc at the beginning of the relevant period. Indeed, such documents have been instrumental in dispelling the view that the pivotal events of 1989 had relatively short-term roots. Some analysts have developed reasonable arguments tracing the fall of the Warsaw Pact back only as far as 1985, but for the most part, these are unsatisfying, ignoring critical factors such as the rise of the hawkists in America, and the role of world-wide peace movements. In addition, the release of top secret CIA files has shed interesting light on the under-rated Afghan conflict. These suggest that far from being yet another target for moralistic US containment, Afghanistan was set up by the Americans as an attempt to trap the Soviets in an exhausting Third World contest- to "give them their own Vietnam." This discovery, and others relating to the nuclear arms race, technology, the media, and human rights debates, indicates that while not as active as initially supposed, the US was highly instrumental in bringing down European communism. At the same time, however, evidence of a self-perpetuating economic crisis, a crisis which was to spawn the powerful dissident movements in Eastern Europe, can be seen in Soviet archives as early as 1960. It could thus be argued that communism was, as an impractical, unpopular system, doomed to eventual failure. That this occurred on such a grand scale, however, and as early as 1989, must be attributed to Gorbachev's dramatic reform policies; these were in turn shaped by both external and internal pressures, as well as the particular political matrix, formulated under Khrushchev, in which Gorbachev's career began. ...read more.

This, a tribute to the merits of capitalism, and a tool for awakening civilians to their own economic repression, mobilized reformist movements in a way that even Washington, responsible for developing the technology for this project, had never anticipated. Running parallel to these subtler channels of pressure was the typically forefront issue of nuclear arms. And, indeed, a dramatic shift in U.S. nuclear policy around 1978-79 can be discerned, although demand for a "zero option" in Europe was a consistent theme throughout the relevant period. To return briefly to the 1970s and d�tente, we see the nuclear arms race denounced as pointless- "a vicious circle."5 Both the U.S. and the Soviet Union made marked steps during this passage of the Cold War towards the dissolution of the contest- with the partial test ban treaty of 1968, and the ABM treaty of 1972. Approximately mid-way through Jimmy Carter's term, however, the soft-line policy was reversed, and the U.S. began to pressurize the Soviets by developing MRVs, and escalating the production of unlimited weapons. In addition, NATO formulated a tough response to the previously unanswered SS 20 missiles, which allegedly targeted Western Europe. The proposed introduction of the Pershing II and Tomahawk missiles in West Germany and the Netherlands was a new approach, replacing the former agreement to engage in talks on the matter. That this shift coincided with the realization that the nuclear arms race was exhausting dwindling Soviet resources and morale, suggests that it was the direct result of new insights into Soviet behaviour. As American pressure in this arena continued to rise with the development of SDI, the reality that the USSR lacked the power to retaliate began to dawn upon those in charge of foreign policy. One would think, with the traditional gauge of Cold War tensions- the nuclear contest, in such a unilateral state, that superpower relations were becoming progressively peaceful. ...read more.

This implosion is perhaps symbolized by the fall of the Berlin Wall, which occurred after Gorbachev liscensed Hungary to open its border and thus provide an escape route for East Germans. It was echoed in the Soviet Union two years later- the Red Army had staged a brief coup in the interests of a military intervention in Eastern Europe, and had failed. Gorbachev had tried to regain popular support, and had proposed a new constitution, dismissing the CPCC, but Estonia, Ukraine, and Belarus nonetheless declared their independence. By 1991, communist rule in Eastern Europe and the Soviet Union was over, and the world was left to reflect on the "sad, bizarre chapter in human history,"9 that had just been written. It can thus be confirmed that the decline of communism after 1985 was the direct result of Gorbachev's policies. And, in this sense, it was an internal force that brought about the actual collapse that occurred, although, as already established, this was shaped both by U.S. pressure and conditions within the Eastern bloc. It is important, in addition, not to overlook the role that American policy played in these latter years. That Reagan and Thatcher continued to build western economies that far outshone those in the East certainly kept the pressure on the communists. Likewise, Regan constantly challenged Gorbachev's commitment to peace, demanding that he "open this gate...tear down this wall."10 For the most part, however, the collapse was self-contained after 1985. It is perhaps best summarized by Erik Chenoweth in his article, Common Elements of Successful Opposition to Communism: "pluralism is an anathema to communism and...can survive communism's system of terror, where the system's terror is balanced by society's opposition."11 1 Timothy Sowula, The Helsinki Process and the Death of Communism, 2002. 2 Richard Piper, D�tente and Its Demise, 2001. 3 ibid. 4 Timothy Sowula, ibid 5 Colonel-General Nikolai Chervov, as quoted in D�tente And Its Demise, 2001 6 Brezezinksi, The Afghan Caper, 2004 7 ibid. 8 ibid. 9 Robert Reagan as quoted in Misinterpreting the Cold War- www.foreignaffairs.org/19950/001fareviewessay5008/richard-pipes.html 10 ibid. 11 http://www.idee.org/cubaideas4.html ?? ?? ?? ?? ...read more.