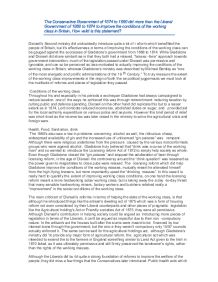 The Conservative Government of 1874 to 1880 did more than the Liberal Government of 1868 to 1874 to improve the conditions of the working class in Britain, How valid is this statement?

Although Disraeli's contribution in helping society could be argued as introducing more pieces of legislation in terms of the Liberals, it can't be argued as impactful due to their non-compulsory nature. In the artisan's act the houses built after the slums were meant to be financed by low interest loans through the government, but the since they weren't compulsory only 10/57 councils actually enforced it. The same can be said for the agricultural holdings act, although Gladstone's ministry did 'nt provide any major form of agricultural reform, the agricultural act which was intended to extend the to the farmers in England something similar to Land Act given to the Irish in 1870 failed, as it was ultimately permissive and still firmly preserved the landowner's rights, rather than the rights of the working masses. Although the Liberals did build quite a strong foundation of reforms to improve the welfare of the people, they did miss a few things that the Conservatives later introduced. Public health acts which brought all the previous legislation dealing with health the under one act, the River pollution Act which oversaw the pollution rate in rivers and the Sale of Food and Drugs Act, 1875 which tried to stop the adulteration of food were all solely introduced in Disraeli's reign not in the period of Gladstonian's ministry. ...read more.

Although Disraeli's reform of the educational system i.e. Lord Sandon's Education Act of 1876 can be seen as improving the lives of the working classes, by putting pressure on parents to spend their children to school and so providing masses of children with an education, there was an underlying political agenda behind it. Forcing children to attend local school was a way of propping up Anglican schools and stopping the spread of non-conformist school boards, set up by the Forster Act of 1870. However in comparison Gladstone's policies where more centralised on removing any inequality or discrimination practised on religious grounds. This idea is clearly emphasised by his University tests Act of 1871 and Forster Elementary Education act which ultimately improved the efficiency of the nation's institutions, and so arguably did more for education than the Conservative Government of 1874 to 1880, who were only really interested in seeing the interests of the Church of England. However on the flipside it can also be argued that the Forster's Act although substantial, fell short of the aspirations of National Educational league. Ultimately weighing all the factors I must say that The Conservative Government of 1874 to 1880 did more than the Liberal Government of 1868 to 1874 to improve the conditions of the working class. ?? ?? ?? ?? ...read more.