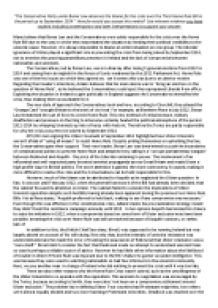 The Conservative Party under Bonar Law deserves the blame for the crisis over the Third Home Rule Bill in the period up to September 1914. How far would you accept this verdict?

﻿?The Conservative Party under Bonar Law deserves the blame for the crisis over the Third Home Rule Bill in the period up to September 1914.? How far would you accept this verdict? Use relevant evidence you have studied including contemporary and later interpretations to support your answer. Many believe that Bonar Law and the Conservatives were solely responsible for the crisis over the Home Rule Bill due to the way in which they exacerbated the situation by lending their political credibility to the unionist cause. However, it is always impossible to blame an entire situation on one group. The Liberals' ignorance of Ulster played a significant role in preventing the crisis from being solved by September 1914, not to mention the growing paramilitary presence in Ireland and the lack of compromise between nationalists and unionists. The Conservatives, led by Bonar Law, were in disarray after losing 3 general elections from 1912 to 1914 and seeing their stronghold in the House of Lords weakened by the 1911 Parliament Act. Home Rule was one of the few issues on which they agreed on, yet it seems this was due to an ulterior motive. Regarding their leader's intentions, Adams believes that his main desire was to "bring an election on the question of Home Rule?, as he believed the Conservatives could eject the unprepared Liberals from office. ...read more.

Yet as Rees states, ?Asquith preferred to hold back, waiting to see if any compromise was necessary.? Even though this was effective in the constitutional crisis, Jalland claims his procrastination strategy meant they didn't treat the resistance campaign seriously until 1913. In her opinion Asquith had missed his chance to seize the initiative in 1912, when a compromise based on some form of Ulster exclusion may have been possible, meaning the crisis over Home Rule was still unresolved because of Asquith's actions, or rather, lack of. In addition to this, the British Chief Secretary, Birrell, was supposed to be running Ireland but was largely absent on account of his wife dying. Not only that, but the intensity of unionist resistance was underestimated and he made the error of trusting the assurances of Redmond that Ulster resistance was a ?mere bluff.? Birrell didn't consider the fact that Redmond made no attempt to understand unionist fears so wasn't perhaps a reliable source of advice. However he had little other information about the likelihood of trouble in Ulster if Home Rule was imposed due to the RIC's failure to garner accurate intelligence. This was because they were used to watching nationalists so had few informers in the unionist community. ...read more.

This shows how both nationalist and unionist ambitions can be seen to be at fault when it comes to the crisis surrounding Home Rule. In a final attempt to get all sides around the negotiating table, King George V proposed an all-party conference to seek a compromise. This took place in Buckingham Palace, July 1914 but by the second day Asquith knew no solution would emerge. Writing to an associate, he said he had "rarely felt more helpless." Although, both sides had agreed to partition, they couldn't agree on the fate of Tyrone and Fermanagh. So once again, the lack of negotiation between the opposing rivals is blamed for the crisis. Although under the leadership of Bonar Law, the Conservatives deserve a large share of blame for the crisis surrounding Home Rule, they don't deserve all of it. It's true that the political game they played, aligning themselves with the unionists to advance their party's position did worsen the situation but the same can be said of Asquith's reluctance to do anything due to his own policy of "wait and see." When the clashing of aims between unionist and nationalist sides are considered, as well as their refusal to compromise, it is clear that there are a variety of groups that can be held accountable for the way in which a crisis couldn't be resolved. ...read more.