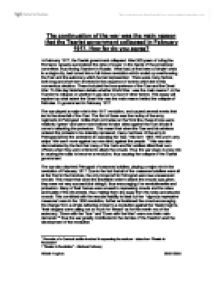 The continuation of the war was the main reason that the Tsarist government collapsed in February 1917. How far do you agree? In February 1917, the Tsarist government collapsed. After 300 years of ruling the Romanov dynasty surrendered the reins of power to the hands of the provisional committee, thus ending Tsardom in Russia. What had, at first been a 'simple' crisis in a single city, had turned into a full-blown revolution which ended up overthrowing the Tsar and the autocracy which he had represented. There were many factors, both long and short term involved in the sequence of events which led to this momentous decision. These included the incompetence of the Tsar and the Great War. To this day historians debate whether World War I was the main reason for the Tsardom's collapse or whether it was due to a host of other factors. This essay will explore top what extent the Great War was the main reason behind the collapse of Nicholas II's government in February 1917. ...read more.

as for the overthrow of the autocracy. 'Down with the Tsar!' and 'Down with the War!' were now their main demands.2" thus the war greatly contributed to the demise of the Tsardom and the development of the revolution. Another way in which the war contributed to the collapse of the Tsardom was the necessity for rationing and other such deprivations. After 3 years of war, the Russian people were beginning to feel the adverse effects of a long drawn-out conflict on such a large scale. There was a general shortage of food and this meant that people became more desperate and more susceptible to believing in rumours. Thus when a rumour of bread rationing circulated, there was a host of people ready to believe it. This single factor caused the protests in the first place even though there was enough bread in the city to last another three months. Therefore the war caused the protests which evolved into the 1917 revolution. The war also contributed to the Tsar's demise by highlighting the incompetency and inefficiency of the high command. ...read more.

Furthermore, had the Tsar and his advisors not given the fatal order to violently repress the crowds, it is uncertain whether the "revolution" would have been a success. Also had the officials in Petrograd given out bread to the masses then the revolutionaries amongst the protestors would have been unable to harness the raw power of the crowds and turn it into a political revolt. Thus the incompetence of the Tsar and his ministers played a pivotal role in the collapse of the Tsarist regime. To conclude the war did play a major role in the collapse of the Tsarist government and can be seen as a catalyst. However there were other factors which also played key roles in the February revolution of 1917, which must not be forgotten. Therefore although the war did play a major role in the demise of the tsarist government, it was not the main reason as other influential factors were also involved. 1 Remarks of a Cossack soldier involved in repressing the workers - taken from "Russia in Revolution" 2 "Russia in Revolution" - Glorious February ?? ?? ?? ?? Alistair Hughes 28/01/2008 ...read more.