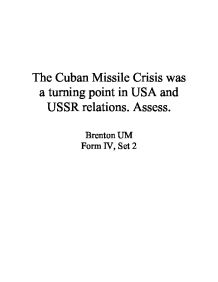 The Cuban Missile Crisis was a turning point in USA and USSR relations. Assess.

The Cuban Missile Crisis was a turning point in USA and USSR relations. Assess. Brenton UM Form IV, Set 2 The Cuban Missile Crisis was indeed a turning point in USA and Soviet relations during the Cold War. The event stands in history as one that nearly brought humanity to the brink of destruction and is known as perhaps the single greatest political battle between the two superpowers, the world has ever seen. It also started a d�tente that which instigated an end to the arms race between the two nations. Following the Cuban Missile Crisis the two leaders, Kennedy and Khrushchev, found a new respect for each other, and this laid the foundations for a strengthened understanding between the two countries. Yet above all things it caused the nations to realise their capabilities and become more aware of the consequences their Cold War could have on society not only at the present time, but for years to come. Since the Cuban Revolution of 1959 led by Fidel Castro, tension between the United States and Cuba had been rising. America's dominance in Cuban economic affairs was stemmed as Castro seized foreign owned properties and businesses. ...read more.

Military action could induce an international nuclear conflict which would endanger millions of unnecessary lives. On the other hand, a complete blockade of Cuba followed by political negotiations would not guarantee the removal of missiles already operational within Cuba which left millions of American lives at risk. On this decision, the Kennedy government stood divided, and the final decision to blockade Cuba was not one that was unanimously supported. This eventual action initiated a series of discussions between the Whitehouse and the Kremlin through diplomatic channels. Brinkmanship at its largest scale was carried out and for thirteen days the two world superpowers demanded that their unconditional terms be met. On the 28th of October, the crisis' final day, withdrawal of offensive nuclear weapons from Cuba was agreed upon in return for a US pledge that Cuba would not be invaded. Nuclear warfare had been avoided and as Dean Rusk put it the two nations, 'went eyeball to eyeball, and I think the other fellow (The Soviet Union) just blinked.' The Cuban Missile Crisis marked what many believed to have been the point where the Cold War began to 'thaw'. ...read more.

It was this understanding, that caused both the United States of America and the Union of Soviet Socialist Republics to apprehend that their relations had to improve if they were to prevent social destruction through nuclear warfare. The Cuban Missile Crisis brought about a realisation and more importantly the steps, although small, towards a strengthened relationship between the world's biggest superpowers. The Cuban Missile Crisis will stand in history as the event that took the world to the brink of nuclear warfare. Yet amongst that, the crisis dramatically strengthened USA and USSR relations during the Cold War. Its eventual ending marked the relaxation between the conflicting nations and formed an unusual respect between both Kennedy and Khrushchev. Both these effects laid the foundations for strengthened relations between the two Cold War countries' leaders. Yet above all things, the Cuban Missile Crisis was a vital turning point in US and USSR relations as it made both nations realise their actions could sculpt the lives of millions of not only the present but also future generations. If not for the good judgment of Kennedy and the prudence of Khrushchev that lead to the stronger affiliations, society as we know it would be dramatically different. ?? ?? ?? ?? ...read more.