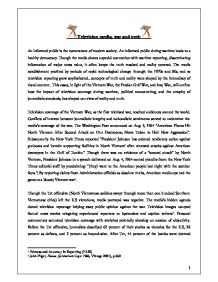 The dissemination of democratic ideals, the propulsion of public information and the institution of free speech are in the eye

Television media, war and truth An informed public is the cornerstone of modern society. An informed public during wartime leads to a healthy democracy. Though the media shares a special connection with wartime reporting, disseminating information of major news value, it often keeps the truth masked and reality covered. The media establishment profited by periods of rapid technological change through the 1970s and 80s, and as television reporting grew sophisticated, concepts of truth and reality were shaped by the immediacy of visual content. This essay, in light of the Vietnam War, the Persian Gulf War, and Iraq War, will outline how the impact of television coverage during wartime, political manoeuvring, and the atrophy of journalistic standards, has shaped our view of reality and truth. Television coverage of the Vietnam War, as the first televised war, reached audiences around the world. Conflicts of interest between journalistic integrity and nationalistic sentiments served to undermine the media's coverage of the war. The Washington Post announced on Aug. 5, 1964 "American Planes Hit North Vietnam After Second Attack on Our Destroyers; Move Taken to Halt New Aggression". Subsequently the New York Times reported "President Johnson has ordered retaliatory action against gunboats and 'certain supporting facilities in North Vietnam' after renewed attacks against American destroyers in the Gulf of Tonkin." Though there was no evidence of a "second attack" by North Vietnam, President Johnson in a speech delivered on Aug. ...read more.

The American Administration, evidence later indicated, utilized television images and newspaper reports to convince the public that Iraqi troops were threatening to invade oil rich Saudi Arabia. Though satellite images taken of Saudi Arabia's border detailed a small number of Iraqi troops, U.S newspapers, news magazines and television networks drummed up reportage in line with the Administration's political agenda. Independent press and peace activists argued against the deployment of U.S troops to the area campaigning for a UN peace-keeping force to be sent. But such sentiments did not percolate into the U.S media. Although television coverage saturated airwaves to summon public support for a U.S invasion of the Persian Gulf, television feeds of suffering Kurds, and other Iraqis, prompted large segments of the public against military solutions for conflicts in the Middle East. Mark Rozell Professor of public policy at George Mason University punctuated the impact of wartime television coverage by citing a Gallup Poll: A January 1991 Gallup Poll revealed that 89 percent of the American people identified television as their main source of information about the war; only 8 percent of the American people identified radio and 2 percent newspapers. The U.S led invasion of Iraq saw satellite internet and television, and further sophistication in television equipment, help the myriad U.S news agencies who invested their time in covering the war. ...read more.

The notion of absolute truth and reality of television coverage is undermined by the representations of Al Jazeera as both a "mouth piece of the zionists" and a "mouth piece of Osama Bin Laden"11. Al Jazeera cutting to commercials plays a 30-60 second montage of American war planes, American bombs exploding and American army tanks across the desert. These images have come under criticism from U.S Press Officers. Dichotomies of interest will remain affirms U.S military Press Officer Lt. Josh Rushing as long as Al Jazeera & U.S media continue to play to their respective audiences: When I watch Al Jazeera I can tell what they're showing and what they're not by choice. It's the same thing when I watch Fox at the other end of the spectrum. It benefits Al Jazeera to play to Arab nationalism Just like Fox plays to American patriotism. Because that's their demographic12. Incessantly rolling out television images the media oversimplifies the coverage of war. An informed media - covering factual stories free from political slant - is increasingly important in a growing democracy. The media coverage of the Vietnam War led to degradation in journalistic integrity; the Persian Gulf conflict deepened political ties between the American Administration and the media; Iraq War is covered by a multitude of U.S news agencies but also an Arabic television news channel. Though the wars were covered by the media in different lights the widening political influence and diminishment of journalistic cannons have been common threads that have shaped our understanding of truth and reality. ...read more.