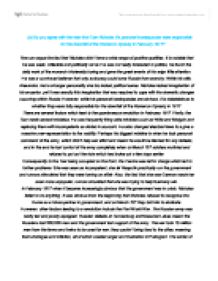 The downfall of the Romanov Dynasty

(a) Do you agree with the view that Tsar Nicholas II's personal inadequacies were responsible for the downfall of the Romanov dynasty in February 1917? Few can argue the fact that Nicholas didn't have a wide range of positive qualities. It is notable that he was weak, inflexible and politically na�ve. He was not really interested in politics, he found the daily work of the monarch intolerably boring and gave the great events of his reign little attention. He was a convinced believer that only autocracy could save Russia from anarchy. While his wife, Alexandra, had a stronger personality she too lacked political sense. Nicholas lacked imagination of his ancestor, yet it was exactly this imagination that was required to cope with the dramatic changes occurring within Russia. However, while his personal inadequacies are obvious, it is debatable as to whether they were fully responsible for the downfall of the Romanov Dynasty in 1917. There are several factors which lead to the spontaneous revolution in February 1917. ...read more.

The winter of 1916- 17 was severe, food shortages got worse and there was a famine in the cities. It has been argued that whether Nicholas had taken control of the army or not, only Russian success in the war would be acceptable, 'the good of her people demand this war to be waged to a victorious conclusion no matter what'. Economic discontent, closely linked with war, was another major factor contributing to the downfall of the government. The living standards of the population suffered a rapid decline after the outbreak of fighting in 1914. Rising prices destroyed the buying power of wages, and to meet the heavy costs of war the government resorted to simply printing more money ultimately leading to inflation. Russia enjoyed good harvest in 1914, 1915 and 1916 however these were not getting through to cities and towns, due to a serious breakdown in rail communications. There was also fuel shortages, not only did this affect people in their homes but also factories, which in February 1917 were forced to close or operate on short time. ...read more.

Social Revolutionaries wanted a peasant revolution, and to take all the land from the nobles. The Mensheviks and the Bolsheviks both were in favor of Communism; however the Bolsheviks wanted a proletarian revolution. Autocracy was viewed by many as simply outdated and inefficient. Peasants and workers in the towns were extremely dissatisfied, as they suffered from low wages, long hours and terrible working conditions. The poor wanted to improve their standard of living and of course blamed Nicholas for the hardship they received. In conclusion, some people viewed the war as inevitable due to the war, economic crisis and many other key factors. They believe Nicholas was not simply unfit to rule Russia, but a convinced believer that only autocracy could save Russia from anarchy, and he was clearly wrong. However, as a Tsar and ruler of the country he is responsible for what happens and will ultimately get the blame no matter what goes wrong; however he didn't help himself by making numerous crucial mistakes along the way. Overall, Nicholas II played a major role in the downfall of the Romanov Dynasty but other factors did play a part. ...read more.