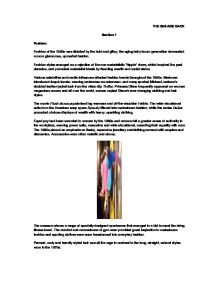 THE 80S ARE BACK Section 1 Fashion Fashion of the 1980s was dictated by the bold and glitzy; the aging baby-boom generation demanded a more glamorous, upmarket fashion. Fashion styles emerged as a rejection of the non-materialistic "hippie" views, which inspired the past decades, and promoted materialist ideals by flaunting wealth and social status. Various celebrities and media influences affected fashion trends throughout the 1980s. Madonna introduced risqu� trends, wearing underwear as outerwear, and many sported Michael Jackson's studded leather jacket look from the video-clip Thriller. Princess Diana frequently appeared on women magazines covers and all over the world, women copied Diana's ever-changing clothing and hair styles. The movie Flash dance popularised leg warmers and off-the-shoulder t-shirts. The wide-shouldered suits from the American soap opera Dynasty filtered into mainstream fashion, while the series Dallas promoted obvious displays of wealth with heavy, sparkling clothing. Equal pay had been awarded to women by the 1980s and women felt a greater sense of authority in the workplace, wearing power suits, masculine and wide-shouldered, asserting their equality with men. The 1980s placed an emphasis on flashy, expensive jewellery and clothing covered with sequins and diamantes. Accessories were often metallic and showy. The museum shows a range of specially-designed sportswear that emerged in a bid to meet the rising fitness trend. The comfort and convenience of gym wear provided great inspiration to mainstream fashion and sporting clothes were soon transformed into everyday fashion. Permed, curly and heavily-styled hair was all the rage in contrast to the long, straight, natural styles worn in the 1970s. Punk fashion, a non-conformist rebellious style, gained momentum throughout the 1980s. Inspired by the English band, Sex Pistols, punk fashion was loud, aggressive and designed to shock. ...read more.

Since the advent of television, America has been able to produce programs more cheaply than that of Australia's due to its large population, strong economy and booming entertainment industry. This led to a flooding of the domestic market by less expensive, imported content. Fast food chains were introduced into the Australian market, offering quick, affordable, takeaway food. This trend led to the introduction of microwave ovens for American-style pre-packaged goods and quickly became an established part of the diets of many Australians. American influences changed the type of foods consumed and the time people spent preparing food. Advances in communication technologies enabled wide-spread, frequent and up to date broadcasts of American sport in Australian homes. The uptake of basketball and baseball boomed as well as sports clothing and the use of high-tech sporting equipment that was developed in America. Australian sport also followed the American trend towards increased corporate involvement. Sporting matches featured American-style glitz and glamour, such as cheerleaders and mascots. Section 2 Fashion One third of Australia's population live in the country in farming and rural communities. Driza-Bone has developed high-quality fashion to suit this lifestyle and to withstand the harshness of the environment. The Driza-Bone ('dry as a bone') oilskin riding coat is to Australians what the Burberry trench coat is to the English: a symbol of heritage, values and culture. The coat is the traditional Australian stockman's coat. A new generation of street wear designers takes its inspiration from Australia's surf culture, graffiti and art and has created its own unique style. Internationally acclaimed Sydney designer Akira Isogawa, whose work is known for its impressive cross-cultural fusion, reflects the sophisticated, cosmopolitan and multicultural nature of Australian society. ...read more.

Most of the fashion designers we see setting our trends have gotten their inspiration from the older eras but bring them up to date, into fashion. Many trends of the 1980s started off as a fashion statement to be something different and something more eccentric, in order to stand out from the crowd. These trends have been modernised, been made to look more chic and wearable for the everyday user, yet also for the couture haute and items that were wearable for everyone on the catwalk. It is because of the 1980s that Australians today have the choice to express themselves in the way they dress. Exhibition Dress Many present clothes state boldness, whether it'd be neon pink leg warmers or checked dresses, a style that was inspired by the 80s. The 80s were a chance to be brave with fashion and people created the quirkiness and trendiness that we currently see in our catwalks which are depicted into our streets and modern fashion industry. Before the 2000's, the 1980's were the only decade where mixing black and blue was somewhat acceptable; it is no longer a fashion faux pas. Rising hemlines were also an influence from the 1980s, a rebellion against previous stuffier styles. Many sub-cultures today would not exist without the influence of designers like Vivien Westwood. Not every era can find its way into history, while only those eras that have really changed our life value can. We commonly speak about past and the present. Every person wants to know about the present and future but hardly anybody speaks about the importance of past. We must remember that present cannot exist in absence of the past. We can only truly understand what the present is if we understand our past. The 1980s is an era of strong significance in the modern history of Australia. ...read more.