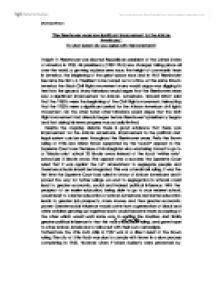 The Eisenhower years saw significant improvement for the African Americans

"The Eisenhower years saw significant improvement for the African Americans." To what extent do you agree with this statement? Dwight D. Eisenhower was elected Republican president of the United States of America in 1953. His presidency (1952-1961) saw changes taking place all over the world, a growing nuclear arms race, the height of communist fears in America, the beginning of the great space race and in 1961 Eisenhower became the first U.S. President to be forced out of office. At the same time in America the Black Civil Rights movement many would argue was digging its feet into the ground. Many historians would argue that the Eisenhower years saw a significant improvement for African- Americans. Harvard Sitkoff said that the 1950's were the beginning of the Civil Rights movement, insinuating that the 1950's were a significant period for the African-American civil rights movement. On the other hand other historians would argue that the Civil Rights Movement had already begun before Eisenhower's presidency began and that during his terms progress was actually limited. Despite the ongoing debate there is good evidence that there was improvement for the African Americans. Improvement in the political and legal system can be seen throughout the Eisenhower years. ...read more.

This ruling really highlighted the economic strength of the black community; together they could change their situation by taking away their economic influence from businesses. The death of Emmett Till in 1955, although a blatant example of social violence, did in fact improve the social situation for African Americans. When Till was brutally murdered for flirting with a white girl pictures of his disfigured dead face were published all over America after his mother insisted in having an open casket at his funeral because she wanted everyone to see "what they did to my boy." The publicity around his death highlighted the still brutal treatment of blacks in the south to the people in the north. Many historians on the other hand have argued that there was limited improvement for African Americans in the Eisenhower years. Historian Robert Cook said that the Black Civil Rights movement had already started before the 1950's and that in fact it was slowed and limited during the Eisenhower years. Despite the obvious political and potential economic advances many of these were in fact limited by the social situation. The Brown ruling of 1956 was a landmark verdict, however what it actually achieved was little and very slow in progress. ...read more.

However overall I would argue that the improvements or non improvements were split. In terms of political success the improvements were vast. They might have been slow in practise but the fact that politicians and the Supreme Court were willing to rule in favour of African Americans suggests two things, the first that the courts were becoming fairer, and the amendments passed in previous years were beginning to count for something and second, that politicians were beginning to realise the blacks political power. Economically the progress was a little slower again in practise but in terms of the African Americans realising their economic power improvements were again vast. They learnt that united they were a force that could economically persuade a situation. Finally in terms of their social situation there were improvements in the sense that their cause was becoming more and more well known and supported, more people were becoming sympathetic. However violence was still at a height in the south. I think the Eisenhower years did see some improvement for the African Americans, they saw the emergence of some Civil Rights leaders that would go on to inspire thousands but they also highlighted the continuing problems with white public opinion of blacks. Improvement was gained but it was limited. ?? ?? ?? ?? Sheri Matthews ...read more.