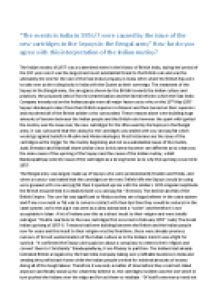 The events in India in 1856/7 were caused by the issue of the new cartridges to the Sepoys in the Bengal army How far do you agree with this interpretation of the Indian mutiny?

﻿?The events in India in 1856/7 were caused by the issue of the new cartridges to the Sepoys in the Bengal army? How far do you agree with this interpretation of the Indian mutiny? The Indian mutiny of 1857 was a watershed event in the history of British India, during the period of the 100 year rule it was the largest and most substantial threat to the British rule and was the ultimately the end for the rule of the East India Company in India. After which the British Raj were to take over as the ruling body in India with the Queen as their sovereign. The treatment of the Sepoys in the Bengal army, the arrogance shown by the British towards the Indian culture and practises, the proposed idea of forced westernisation and the liberal reforms which the East India Company introduced on the Indian people were all major factors as to why on the 10th May 1857 Sepoys disobeyed orders from their British superiors in Meerut and then turned on their superiors and murdered all of the British soldiers who surrounded. These reasons alone were building huge amounts of tension between the Indian people and the British rule however the spark with ignited the mutiny was the issue over the new cartridges for the rifles used by the Sepoys in the Bengal army, it was rumoured that the casing for the cartridges was sealed with cow and pig fat which would go against beliefs in Muslim and Hindu ideologies. ...read more.

argue was the main factor as to why the mutiny occurred as it was such an insult to the way the Indian people run their society. ?Dalhousie?s unbridled policy of territorial annexations was bound to alienate local rulers and their followers. As a climax to a series of annexations Dalhousie brought the ancient province of Avadh under the company rule in 1856? Judd: The Great Indian uprising of 1857-8. This alongside with other annexations was one of the final straws in the aggravation of the Indian people. It allowed any princely state whom did not have a male heir to be taken over control by the East India Company. ?A formula which allowed the East India Company to extend its control into Indian territory when a native ruler died without what the Company considered a legitimate heir. Indian tradition held that adopted children had the same inheritance rights as birth children. But the company did not recognize their heirs. In Oudh, the application of the Doctrine was considered a final outrage of British conquest.? Joseph Coohill: History Today, the Indian rebellion. Due to the historical and cultural importance of Oudh in Indian society it was considered a huge cultural insult and one which the Indians would not stand for, all of these factors were huge contributors to why the Indian mutiny occurred in 1857. ...read more.

To conclude it was not the cartridge issue which was the main factor as to why the Indian mutiny occurred in 1857, it was a catalyst, an issue which was the final straw to a lot of inconsiderate cultural and political changes to the Indian society which the British rule believed they could get away with and it caught up with them in 1857 when did rose up and fought back against their imperialist rulers. Bandyopadhyay does make the argument that the cartridges were a vital issue as to why the mutiny occurred however Judd, Coohill and Brendon all see similar views in that it was the liberal reforms within both personal life and the changes to the way the Sepoys were treated was the main cause for the mutiny, in particular the Doctrine of Lapse as it interfered with all parts of the Indian way of life and gave the impression that they wanted dominated of the country and full control of the states within. It could be argued that if the cartridge issue had not had happened then the mutiny would have happened later on or not even happened at all, it was the final straw for the people in India, alongside their view of a change every 100 years they knew something had to be done, and in a lot of people?s minds this was it. ...read more.