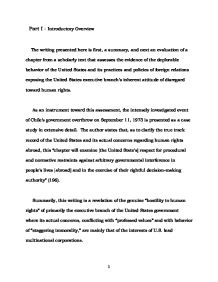 The evidence of the deplorable behavior of the United States and its practices and policies of foreign relations exposing the United States executive branch's inherent attitude of disregard toward human rights.

Part I - Introductory Overview The writing presented here is first, a summary, and next an evaluation of a chapter from a scholarly text that assesses the evidence of the deplorable behavior of the United States and its practices and policies of foreign relations exposing the United States executive branch's inherent attitude of disregard toward human rights. As an instrument toward this assessment, the intensely investigated event of Chile's government overthrow on September 11, 1973 is presented as a case study in extensive detail. The author states that, as to clarify the true track record of the United States and its actual concerns regarding human rights abroad, this "chapter will examine [the United State's] respect for procedural and normative restraints against arbitrary governmental interference in people's lives [abroad] and in the exercise of their rightful decision-making authority" (196). Summarily, this writing is a revelation of the genuine "hostility to human rights" of primarily the executive branch of the United States government where its actual concerns, conflicting with "professed values" and with behavior of "staggering immorality," are mainly that of the interests of U.S. lead multinational corporations. Initially, the text addresses recent increasing awareness of a long history of human rights abuses by the United States discrediting a generally perceived idea of "an [unusually high] degree to which human rights are practiced within [American] society and honored in [the United States] external relations with other countries" (196). Additionally, defined are ideal aspects of human rights including its principle dimensions of "self-determination" of a nation and of "nonintervention by one state in another state's domestic affairs" (197). ...read more.

This set the stage for the September 11, 1973, U.S. urged and supported, Chilean military coup d'tate deposing President Allende along with his democratic government. In consideration of the above, the text then addresses blatant U.S. public rhetoric as false "professed values" and refutes each by the examining the explicit behavior of the United States and U.S. lead multinational corporations to reveal actual "implicit values." Paramount is the ironic, conflicting value that the U.S. justified intervention in the Allende government to protect democracy; as per a televised statement by President Gerald Ford asserting that concern "is in the best interest for the people in Chile." This statement is contrary of the actual secretly planned undertakings and overall behavior of the United States executive branch resulting in deposing a democratic leader with a ruthless military dictator. Finally, various, more favorable outcomes of the Chilean case are explored within the Global Humanist approach, which the author acknowledges the futility of such speculation. Ultimately, the realization is that there are stark contrasts that "separate the picture of the world painted by U.S. officials from the picture envisaged by advocates of global humanism" (278). Part III - Contemplative Evaluation In all cases, there are two sides to a story where the truth lies somewhere in the middle. Many times, a concrete conclusion is not per objective review of the evidence presented and, the evidence may be slanted. Additionally, many facts may be obscured forever making an appraisal of one's actions nearly impossible and possibly unfair and unjust altogether. ...read more.

It is mind-boggling and disheartening. With the events of recent regarding the current White House and global capitalistic trends of the corporate world, I find it difficult to find disagreement with the text as presented as I see several parallels with the Chilean case. Namely, this would be the White House and corporate America taking advantage of idealistic values and using them for profit and gain. An example would be the publicly expressed concerns for the Iraqi people living under a repressive regime, a human rights platform, where obviously this is not the actual agenda. In Chile, a publicly expressed concern was that of the national security of the United States as well as that of the Chilean people when actually it was the private financial interests of a couple multinational corporations; there was never any threat to national security under the Allende government. Part IV - Conclusion I feel that it is shameful of the United States White House involvement in Chile. I value the perspective of a well-detailed report such as the one discussed. Further, with its analysis of the collected information, the text here discussed provides for provoking personal appraisal of current events. I recommend that all Americans study and contemplate the Chilean case as it may help provide for a clearer perspective of the present political-economic climate as well as provide for an awareness in recognizing similar conduct in that one may better be inclined toward appropriate action such as constructive discussion with those not so inclined to recognize similar destructive, indifferent behavior by their government. At the very least, a sound and informed dialogue by respect and result of such awareness may possibly increase the numbers of a more emphatic, knowledgeable voter. 1 1 ...read more.