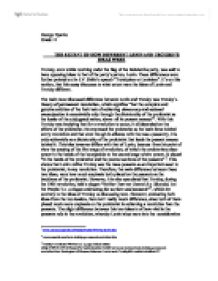 THE EXTENT OF HOW DIFFERENT LENIN AND TROTSKY'S IDEAS WERE

George Nyarko Grade 11 THE EXTENT OF HOW DIFFERENT LENIN AND TROTSKY'S IDEAS WERE Trotsky, even whilst working under the flag of the Bolsheviks party, was said to have opposing ideas to that of the party's patron, Lenin. These differences were further pointed out in J.V. Stalin's speech "Trotskyism or Leninism". It's on this motion, that this essay discusses to what extent were the ideas of Lenin and Trotsky different. The main most discussed difference between Lenin and Trotsky was Trotsky's theory of permanent revolution, which signifies "that the complete and genuine solution of the their task of achieving democracy and national emancipation is conceivable only through the dictatorship of the proletariat as the leader of the subjugated nation, above all its peasant masses"1. With this Trotsky was implying that for a revolution to occur, it all depended on the efforts of the proletariat. ...read more.

However, evaluating both ideas from the two leaders, there isn't really much difference, since both of them placed much more emphasis on the proletariat in achieving a revolution than the peasants. The slight difference between this two ideas is of how vital is the peasants role in the revolution, whereby Lenin takes more into the consideration the peasants, whiles Trotsky considers the proletariat as the sole and major force in the revolution. Apart from the above stated point, I think the best way to find the difference between these two leaders' ideology, is to distinguish between their aims, objectives and methods. Although these are all intertwined in the first paragraph, I would like to place more emphasis on each category in this paragraph. Beginning with Lenin, the text showed that Lenin was more interested in educating the public about the errors the Provisional government omitted which I prove by Lenin's statement "I attacked the Provisional Government for not having appointed an early date or any date at all, for the convocation of the Constituent Assembly, and for confining itself to promises"4. ...read more.

Comparing the aims of the two leaders, one would notice that Lenin was more content with a national revolution and valued it more. However, Trotsky's idea is different in the way that he was more concerned about a revolution world wide than in Russia alone. To conclude with, I think the extent of which the ideas of the two leaders varied was of a slight margin. This I think because it's in a time hierarchy in which both try to find loopholes in their political predecessors since Lenin tried to convey the errors of the Provisional Government whilst Trotsky also tried to find loopholes in Lenin's policies. However, the difference is established within their aims and methods. Also the two leaders share a different opinion when it comes to the value of the peasants in a revolution. But apart from these petty disagreements, I think they all had one goal, of creating a socialist revolution locally, and then letting it go international. This further supports my point why I think the ideology of the Lenin and Trotsky not so different. ...read more.