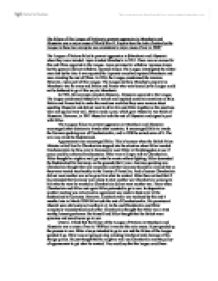 The failure of The League of Nations to prevent aggression in Manchuria and Abyssinia was a major cause of World War II. Explain how the lack of action by the League in these two examples was considered a major cause of war in 1939?

The failure of The League of Nations to prevent aggression in Manchuria and Abyssinia was a major cause of World War II. Explain how the lack of action by the League in these two examples was considered a major cause of war in 1939? The League of Nations failed to prevent aggression in |Manchuria and Abyssinia when they were invaded. Japan invaded Manchuria in 1931. There was no excuse for this and China appealed to the League. Japan promised to withdraw Japanese troops but the generals did not withdraw Japanese troops. The League investigated the matter more but by the time it was reported the Japanese army had captured Manchuria and were invading the rest of China. In 1933, the League condemned the invasion. ...read more.

It encouraged Hitler to invade the German speaking area of Czechoslovakia, and in 1938 he seized some of it. The area was called the Sudetenland. Appeasement also encouraged Hitler. This is because when the British Prime Minister called Neville Chamberlain stepped into the situation when Hitler invaded Czechoslovakia he flew over to Germany to meet Hitler at Berchtesgaden to see if peace could be achieved by discussion. Hitler was willing to talk to Chamberlain. Hitler thought he might as well get what he wants without fighting. Hitler demanded the Sudetenland for Germany, on the grounds that it was a German-speaking area Chamberlain thought that was reasonable and that Germany should be allowed that as they were treated very harshly in the Treaty of Versailles. ...read more.

It just speeded up the process to war. Hitler always intended to go to war and the failure of the League speeded it up. Hitler was not going to stop invading Czechoslovakia because of his foreign policy. He just thought that he might as well use Chamberlain and the policy of appeasement to get what he wanted. You could say that the league could have stopped World |War II because it could have stopped Hitler. However, even if Hitler was stopped Hitler's self determination would have caused him to start up again and finish off Czechoslovakia and then start a war. Hitler always intended to go to war no matter what. Overall, I think the self-determination of Hitler was the main cause of war in 1939 and the failure of the League was minor cause. ...read more.