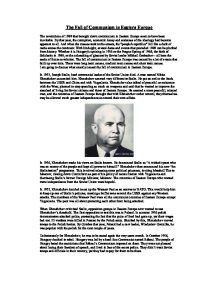 The Fall of Communism in Eastern Europe

The Fall of Communism in Eastern Europe The revolutions of 1989 that brought down communism in Eastern Europe seem to have been inevitable. By that year, the corruption, economic decay and staleness of the ideology had become apparent to all. And when the masses took to the streets, the "people's republics" fell like a deck of cards across the continent. With hindsight, several dates and events that preceded 1989 can be plucked from history. Whether it is Hungary's uprising in 1956 or the Prague Spring of 1968, the birth of Solidarity in 1980, or the unleashing of glasnost by Soviet leader Mikhail Gorbachev - all bore the seeds of future revolution. The fall of communism in Eastern Europe was caused by a lot of events that built up over time. There were long term causes, medium term causes and short term causes. I am going to discuss what exactly caused the fall of communism in Eastern Europe. In 1953, Joseph Stalin, hard communist leader of the Soviet Union died. A man named Nikita Khrushchev succeeded him. Khrushchev seemed very different to Stalin. He put an end to the feuds between the USSR and China and with Yugoslavia. ...read more.

Was there opposition is Czechoslovakia because people were scared of change? Or was it because the economy was in a bad way and there were problems with the living conditions? People who believed that the communists had not led the country forward led the Czech opposition. Seeing as censorship had been eased, they were able to launch attacks on the Communist leaders, saying that they were corrupt and useless. This period of time became known as the Prague Spring, because of all the new ideas that were around. By the summer there was talk of allowing another political party, the Social Democratic party to be set up as a rival to the communist party. The USSR was suspicious of these changes. Czechoslovakia was a very important part of the Warsaw Pact. The soviets did not want the ideas in Czechoslovakia spreading into other countries in Eastern Europe. The USSR tried various methods in response. They tried to slow Dubcek down, arguing with him and getting Soviet, Polish and East German troops to perform very public training exercises on the Czech border. In July, it was decided that there would be no Social Democratic Party, however, Dubcek insisted on keeping most of his reforms. ...read more.

By the end of 1989, not only Germany had seen a revolution, but Czechoslovakia, Hungary, Romania and Bulgaria had also disposed of their Communist governments. During the Brezhnev and Gorbachev years, the ideology behind Communism had a different meaning in comparison to earlier times. Wherever the faithful looked, the traditional prophecies had failed to come through: world revolution had not occurred, crime had not vanished, nationalism and religion had not disappeared with the passing of capitalism, as had been predicted. This disillusionment and belief that Communism didn't fulfil its promises to the people jumped to new highs when Mikhail Gorbachev came to power during the late 1980's. His liberalised style of leadership allowed people express their views and generally the people of the Soviet Union felt wrong done by the ideology which they had be ensured would see the Soviet Union rise as the most powerful nation in the world. The Soviet system was not suited to the ideology on which the regime was based. This ideology turned out to be inappropriate to the end of the twentieth century. As technology changed and as society was transformed, the superstructure - that is, the form of state and its ideology - became a hindrance to further development. This hindrance became a burden on the society the economy and the system. ...read more.