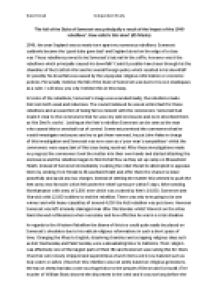 The fall of the Duke of Somerset was principally a result of the impact of the 1549 rebellions. How valid is this view?

﻿David Creed Independent Study ?The fall of the Duke of Somerset was principally a result of the impact of the 1549 rebellions?. How valid is this view? (45 Marks) 1549, the year England was so nearly torn apart my numerous rebellions. Somerset suddenly became the ?good duke gone bad? and England stood on the edge of a class war. These rebellions proved to be Somerset?s last nail in the coffin, however was it the rebellions which principally caused his downfall? Could it possibly have been through his the shambles of the Scottish War and his overall foreign policy which resulted in his downfall? Or possibly his downfall was caused by the unpopular religious reformation or economic policies. Personally I believe the fall of the Duke of Somerset was due to his own inadequacy as a ruler. I will show you why I believe this in this essay. In terms of the rebellions, Somerset?s image was wounded badly; the rebellions made him look both weak and indecisive. The council believed he was at entire fault for these rebellions and accused him of being far too lenient with the commoners. Somerset had made it clear to the commoners that he was very anti-enclosures and even described them as ?the Devil?s works?. ...read more.

The Earl of Southampton was seen as Somerset’s main opposition. Warwick was a power hungry Machiavellian. As soon as he saw Somerset begins to stutter and buckle under pressure he got in contact with Southampton on how to bring him down. With people such as Cranmer on their side alongside Arundel, Somerset had no chance. He was cornered into surrender. Therefore it can be believed that Somerset only lost power due to his opposition forcing him into a position where had no choice but to give that power up. I believe that Somerset’s foreign policy was a huge factor in his downfall especially with regard to the War in Scotland. Somerset had already been proven as quite the warmonger from the years of Henry; however the war in Scotland was seen as an obsession. In reality Somerset lacked huge perspective in this war; he was fighting a losing battle the whole time. With the French allying with the Scots and England not having the finances for this war it was just a recipe for disaster. The war itself cost an astonishing £580,593 leaving Somerset following Henry’s policy of debasement and causing further problems for the people back in England. ...read more.

Due to Somerset not delegating with anyone he was left liable for anything which went wrong. He made enemies on the council such as Southampton who were powerful men who would eventually be part in the coup that overthrew Somerset. Somerset also ruled from Somerset house and used his servants as the council. This left many people angered as he wasn?t the king and he was acting as if he was. Paget had even said to Somerset that if he ruled under his advice he wouldn?t lose power. In conclusion I think all of these factors led to the fall of Somerset, it must be stressed that the role Somerset took on put him in a position where it seemed destined to fail. Henry had left the country in economic crisis and the War in Scotland didn?t just disappear. However I believe Somerset made matters harder on himself by refusing to delegate with the rest of the council. Personally I believe his style of rule was the cause of his fall. His style of rule not only caused a lot of these problems but also left him solely accountable for the blame as important as the rebellions were I believe that they were just the final nail in the coffin. ...read more.