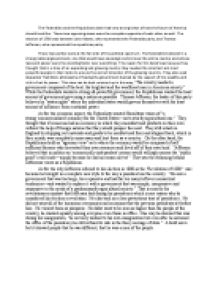 The Federalists and the Republicans both had very strong views of how the future of America should look like.

﻿The Federalists and the Republicans both had very strong views of how the future of America should look like. These two opposing views were the complete opposite of each other as well. The election of 1796 was between John Adams, who represented the Federalist party, and Thomas Jefferson, who represented the republican party. These two parties were at the far ends of the political spectrum. The federalists believed in a strong national government, one that would have sovereign control over the entire country and whose laws and power were the deciding factor over everything. The reason for this belief was because they thought that in a time of an expanding and growing country they needed the smartest and most powerful people in their ranks to ensure the correct direction of the growing country. ...read more.

As for the economic aspect, the Federalists wanted Hamiltons vision of "a strong 'commercialized' economy for the United States?not a strictly agricultural one." They thought that if American had an economy in which they manufactured products on their own without the help of foreign nations that they would prosper the most. They still relied on England by shipping out materials and goods to be manfactured their and shipped back, which in their minds, was completely unnecesary and hurt them as a country. On the other hand, the Republicans held an "agrarian view" as to where the economy would be composed of self sufficiant farmers who harvested their own resources and lived off of their own land. "Jefferson believed that in politics an 'economically independent' person would willingly pursue the ?public good? at all times?simply because he had no reason not to!" ...read more.

That is exactly the revolutionary mindset that Jefferson had during his presidency which is one reason why he considered his election a revolution. He also took on a less pretentious tone of presidency. He did not want all of the luxurious ceremonies and occasions that the previous presidents set before him. He viewed them as pompous. He didnt want to be seen as higher than the people of the country, he wanted equality among everyone even those in office. One way he showed this was during his inauguration, "he not only walked to his own inauguration but even after he assumed the office of the presidency he still refused to ride in the fancy carriage of state." A bold move but it showed people that he was different, that he was a man of the people. ...read more.