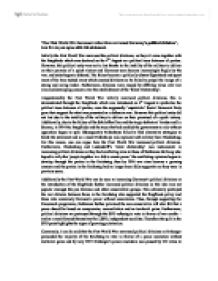 'The First World War increased rather than narrowed Germany's political divisions', how far do you agree with this statement. Initially the First World War narrowed the political divisions, as they all came together with the Burgfriede which was declared on the 4th August as a political truce between all parties. However, this political unity was not to last thanks to the inability of the military to deliver on their promise of a quick victory and Germany soon became increasingly fragile by the war, and unity began to disband. The Kaiser became a politically distant figurehead and spent most of his time tucked away which created divisions as he failed to propel the image of a strong and caring leader. ...read more.

For this reason, one can argue how the First World War increased political divisions. Furthermore, Hindenburg and Ludendorff's 'silent dictatorship' was instrumental in increasing political divisions as they had conflicting aims to those of Bethmann Hollweg who hoped to rally the 'people together in a bid to create peace' the conflicting opinions began to develop through the parties in the Reichstag, thus by 1916 war aims became a growing concern and the parties in the Reichstag had no longer been fully supportive as they were in previous years. Additionally the First World War can be seen as increasing Germany's political divisions as the introduction of the Siegfriede further increased political divisions as this idea was not popular amongst the pan German and other conservative groups. ...read more.

Furthermore, although the SPD deputy Karl Liebknecht voted against war credits at the end of 1914 this opposition was further reflected by the SPD members also voting against war credits at the end of 1915, the increased sense of opinions, which resulted from the outbreak of war was essential in narrowing divisions within the Reichstag, secured political unity. Conclusively, I agree with the statement that the First World War increased rather than narrowed political divisions as Germany's failure to secure a quick victory and effects of war created much debate over war aims which as a result damaged any political unity. However, one can also argue that the passing of the Burgfriede in fact brought together the parties in the Reichstag which have in effect had previously been divided. ...read more.