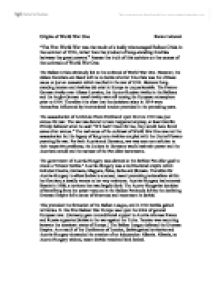 &quot;The First World War was the result of a badly mismanaged Balkan Crisis in the summer of 1914, rather than the product of long-standing rivalries between the great powers.&quot; Assess the truth of this opinion on the causes of the outbreak of World War One.

Origins of World War One Karan Lalwani "The First World War was the result of a badly mismanaged Balkan Crisis in the summer of 1914, rather than the product of long-standing rivalries between the great powers." Assess the truth of this opinion on the causes of the outbreak of World War One. The Balkan Crisis obviously led to the outbreak of World War One. However, the debate historians are faced with is to decide whether this crisis was the ultimate cause or just an occasion which resulted in the war of 1914. However long-standing tension and rivalries did exist in Europe is unquestionable. The Franco-German rivalry over Alsace-Lorraine, the Austro-Russian rivalry in the Balkans and the Anglo-German naval rivalry were all tensing the European atmosphere prior to 1914. Therefore it is clear that the decisions taken in 1914 were themselves influenced by international tension provoked in the preceding years. The assassination of Archduke Franz Ferdinand upon 28 June 1914 was just excuse for war. The war was bound to have happened anyway, at least Gavrilo Princip believed when he said: "If it hadn't been for me, they would have found some other excuse." The real cause of the outbreak of World War One was not the assassination but the legacy of long-term rivalries coupled with the Central Powers yearning for war. For both Austria and Germany, war was seen as a solution to their respective problems; the Junkers in Germany would maintain power and the Austrians would end the menace of the Pan-Slav movements. ...read more.

Russia mismanaged the crisis because not only did they transform a localized war into a European war, but they also fell into Germany's trap and would be portrayed as the aggressor and culpable of this European War. The reason Russia's actions were misread was because Russia was the first one to mobilise; Germany could now portray her as the aggressor and Austria-Hungary as a victim. But it would be correct to say that Russia had been encouraging an alliance that made Austro-Hungarians suspicious. Because of the long-term Austro-Russian clash of interests in the Balkans, and Russia's long-term support of Serbia, it is possible to understand Austro-Hungary's insecurity and their solution of waging war as to be the only alternative left. Russia fully backed Serbia during the July Crisis. When the Austro-Hungarians presented the ultimatum to Serbia, Russia would support her even if it unleashed a great war. "This means a European War" as Sazonov, the Russian foreign minister, labelled the ultimatum; a deliberate provocation. Although Russia's entry would mean German involvement on Austria-Hungary's side, Russia believed that her prestige, the dignity of the Slav states and her influence in the Balkans was at stake. Russia was not fully prepared for war but if war was to break out, Russia would defend her prestige and the dignity of the Slav state. Eventually Russia was left with no alternative. Russia mismanaged the crisis when partially mobilising her army upon 29 July after Austria-Hungary declared war on Serbia, because Russia was exposed as the aggressor. ...read more.

The Social Democratic Party was gaining popularity in Germany which would mean sooner or later, the end of this militaristic elite. In the 1960s the debate about German culpability was reopened by Fischer. He mentioned that "primat der innempolitik" (supremacy of domestic politics) was the main and crucial reason of the outbreak of World War One. In July 1914 Germany was preparing for war; war was foreseen previously. Upon 25 July the Kaiser commented on a telegram to Vienna that the cause of war as now been removed with the Serbian response, and expected Vienna to halt any mobilisation. His comments were altered by Bethmann Hollweg and the Junkers. Now his comments instead of suggesting Austria-Hungary to withdraw and compromise, it gave the Austrian government the push which encouraged them even more to declare war against Serbia. Russian mobilisation was then celebrated by the militaristic elite. Now the SPD's hostility towards war had evaporated and the Junkers had achieved their goals. Each step had been planned. Germany did not mismanage the crisis, but used the crisis to solve their internal problems and to try to achieve their ultimate goal; Weltpolitik. It is clear that the Balkan Crisis provoked World War I. But the Balkan Crisis itself was a product of long-term Austro-Russian rivalry caused by the declining Ottoman Empire. Many elements of the crisis were mismanaged by the European powers, but Austria and Germany certainly did not. As Williamson declared, the "fateful meshing of aggressive German Weltpolitik with an even more aggressive, irresponsible Hapsburg Balkanpolitik" resulted in the war both Empires felt to be inevitable and winnable. ...read more.