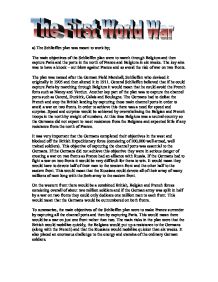 a) The Schlieffen plan was meant to work by; The main objectives of the Schlieffen plan were to march through Belgium and then capture Paris and the ports in the north of France and Belgium in six weeks. The key aim was to have a knock - out blow against France and so avoid the risk of war on two fronts. The plan was named after the German Field Marshall, Schlieffen who devised it originally in 1905 and then altered it in 1911. General Schlieffen believed that if he could capture Paris by marching through Belgium it would mean that he could avoid the French forts such as Nancy and Verdun. Another key part of the plan was to capture the channel ports such as Ostend, Dunkirk, Calais and Boulogne. The Germans had to defeat the French and stop the British landing by capturing these main channel ports in order to avoid a war on two fronts. In order to achieve this there was a need for speed and surprise. Speed and surprise would be achieved by overwhelming the Belgian and French troops in the north by weight of numbers. At this time Belgium was a neutral country so the Germans did not expect to meet resistance from the Belgians and expected little if any resistance from the north of France. It was very important that the Germans completed their objectives in the west and blocked off the British Expeditionary force (consisting of 100,000 well armed, well trained soldiers). This objective of capturing the channel ports was essential to the Germans. If the Germans did not achieve this objective they were in serious danger of creating a war on two fronts as France had an alliance with Russia. If the Germans had to fight a war on two fronts it would be very difficult for them to win. It would mean they would have to devote half of their men to the western front and the other half to the eastern front. ...read more.

New technology like the tank helped to break the deadlock. In October 1914 a proposal was presented to the British government. The plan sketched what mechanised warfare would be like. The tanks were armoured machines on caterpillar tracks which would be brought into position at night. This was because the tanks would be very visible because of their size. German reconnaissance planes may also be able to spot them from the sky and then they could direct artillery towards the tank positions. The advantages of the tank were that bullets from rifles and machine guns were completely ineffective against them because the tanks had very thick armour. The fact that they were bullet proof also meant that troops could run behind the tanks and they would be safe from the bullets. The tanks could use the guns on each side to clear trenches and to give infantry the covering fire they needed. The tanks could advance on the enemy because they could smash obstructions out of the way and roll over barbed wire. There were also disadvantages with the tanks because they were so heavy, they often got stuck in no man's land. No man's land was a very poor environment for any type of vehicle let alone a tank. The tank had been tested on normal grass but no man's land was usually not normal grass because artillery had churned up all the earth so it was always muddy and the tanks often got stuck. The design of the tank was always quite poor even up to the closing months of the war. The tracks of the tank would often fall off because the Germans dug holes which the tanks would get stuck in or the tracks would fall off and then the tank would be stuck. If the tanks got stuck in no man's land all of the crew operating the tank and any infantry behind the tank would be slaughtered be machine gun and rifle fire. ...read more.

The Germans then withdrew to the Hindenburg line; this was a line of concrete bunkers and heavy defences. The Germans could have made a strong stand here but other events were taking hand. On their advance, the Germans had taken heavy casualties because the advantage was always with the defender in the First World War. General Ludendorff exhausted his troops (or what were left of them) after the attack had ended. This made it very difficult for the German troops to retreat and when they did reach the Hindenburg line the troops would have been too exhausted to defend the line from the overwhelming numbers of allied troops on the western front. I believe that this was the most important reason why the deadlock was broken as the Germans lost many soldiers and a great many were wounded. They had no chance of victory even at the heavily fortified Hindenburg line. To conclude, I do not entirely agree that new technology such as the tank, the American entry into the war, the blockading of German ports and the German offensive in March 1918 were equally important. I believe that the German offensive in March 1918 overstretched the German army and gave the allies the chance for a successful counterattack. However the other reasons were also important, the blockade of German ports led to the Germans being forced to attack. The American entry into the war further strengthened the allied forces and the tank gave the allies an advantage when the allies had to attack the German trenches. In 1918 all of these factors really came together. The tanks were getting better and there were more of them. The arrival of American troops seriously damaged German morale and provided fresh reinforcements for the allies. The British naval blockade of German ports starved the German people on the home front and German people had strikes and riots. The German offensive in 1918 exhausted the German troops and they took heavy casualties. All of these factors came together and the Germans had no choice but to surrender. ...read more.