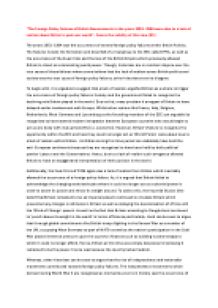 The Foreign Policy failures of British Governments in the years 1951- 1964 were due to a lack of realism about Britains post-war world. Assess the validity of this view (45)

﻿?The Foreign Policy failures of British Governments in the years 1951- 1964 were due to a lack of realism about Britain?s post-war world?. Assess the validity of this view (45) The years 1951- 1964 saw the occurrence of several foreign policy failures within British Politics. The failures include the formation and downfall of a rival group to the EEC called EFTA, as well as the occurrence of the Suez Crisis and the loss of the British Empire which previously allowed Britain to stand as a dominating world power. Though, historians are in constant dispute over the true cause of these failures where some believe that the lack of realism across British politics and society was the root cause of foreign policy failures, other historians tend to disagree. To begin with, it is arguable to suggest that a lack of realism engulfed Britain as a whole to trigger the occurrence of foreign policy failures. Society and the government failed to recognise the declining role Britain played in the world. Due to this, many proclaim it arrogant of Britain to have delayed earlier involvement with Europe. Whilst other nations like France, Italy, Belgium, Netherlands, West Germany and Luxemburg as the founding members of the EEC can arguable be recognised to have started modern integration between European countries who would begin to act as one body with mutual benefits (i.e. ...read more.

The independence movements which derived during World War II are recognised as momentous turns in history saw the occurrence of individual and political protests as well as strikes and boycotts across global colonies in the demand for independence. Therefore some may argue it to be inevitable that Britain found such movements very difficult to control. This is includes the violent Mau Mau Rebellion of 1952 which is proclaimed to have been unexpected, but believed to have triggered reform and Kenyan independence in 1963. Also, Malaya and Cyprus too saw the occurrence of popular and unexpected demands for independence which increased Britain?s expenditure on defence causing in some cases the problem to escalate and therefore creating foreign policy failures. Establishing the fact that Britain was no longer financially secure, like many previous Imperial powers at the time Britain could no longer supress these nationalists because it simply could not afford to and consequently decided to undergo decolonisation. Thus, we can argue that foreign policy failures such as the Suez Crisis happened because Britain was now a p**n in a Kings game; therefore the emergence of new superpowers like the USA meant Britain could no longer throw its weight about, it had to comply to the rules of its superior (USA) ...read more.

Whilst, the Suez Crisis saw Britain put into its place by the USA by enlightening the public that it was no longer strong enough to stand up to the USA as it was suffering from huge economic losses. The role of individuals such as Eden and De Gaulle can be recognised to have caused foreign policy failures. De Gaulle for one vetoed Britain?s application into the EEC, creating foreign policy problems for the country by preventing it to be in with the political and economic inner circle. The French president can be seen to have brought Britain into its place by understanding Britain would be an awkward partner in the EEC. De Gaulle wanted to limit the growing influence the USA was obtaining, especially in Europe therefore by rejecting Britain?s application, De Gaulle was objecting to American interference that were pushing Britain to get into the EEC. Whereas Edens personality conflicted his judgement in the case of the Suez Crisis when responding to Colonel Nassers actions. Although Eden proclaimed himself to be an expert in foreign policy he created the biggest foreign policy failure which would in the coming decades always degrade Britain. Believing that Britain was still an Imperial power he is accused of literally forcing the cabinet to agree with him in dealing with the Suez situation which would turn into one of the biggest scandals in British history. ...read more.