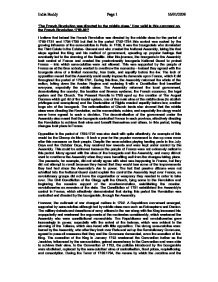 'The French Revolution was directed by the middle class.' How valid is this comment on the French Revolution 1789-99? I believe that indeed the French Revolution was directed by the middle class for the period of 1789-1791 and 1794-1799 but that in the period 1792-1794 this control was rocked by the growing influence of the sans-culottes in Paris. In 1789, it was the bourgeoisie who dominated the Third Estate in the Estates- General and who created the National Assembly, taking the first steps against the King and his method of government, speeding up popular feelings that eventually led to the storming of the Bastille. After this journee, the bourgeois in the Assembly took control of France and created the predominantly bourgeois National Guard to protect France - into which sans-culottes were not allowed. This was supported by the people of France as at the time nobody wanted to overthrow the monarchy - instead they agreed with the bourgeois aims of a limited monarchy, free trade, and equality before the law. The lack of opposition meant that the Assembly could easily impose its demands upon France, which it did throughout the period of 1789-1791. During this time, the Assembly reformed the whole of the nation, taking down the Ancien Regime and replacing it with a Constitution that benefited everyone, especially the middle class. The Assembly reformed the local government, decentralising the country; the taxation and finance systems; the French economy; the legal system and the Church. ...read more.

However, the outbreak of war changed matters in 1792. A Republican movement emerged, supported by sans-culottes although led by middle class men such as Robespierre and Danton. The military defeats and desertions of army officers in the war along with the King increased his unpopularity and weakened the arguments of the moderates considerably, which weakened the Assembly who were constitutional monarchists. The Republicans and revolutionaries grew increasingly in power, especially with the arrival of the federes, which was evident in the storming of the Tulieres, which was faced with little opposition. The strong sans-culottes were feared by the Assembly, who after they took over Paris and set up the Revolutionary Commune, agreed to pass all measures that they and the Commune demanded, even the execution of the King. The execution of the King in January 1793 weakened the Convention further as the Jacobins, influenced by the sans-culottes, gained ascendancy in the Convention and were able to achieve their aims. In the Convention of 1793, the policies introduced by the bourgeoisie were abolished, replaced by the sans-culottes' aims of centralisation, fixed prices, requisitioning and conscription. During the Terror of 1792-1794, the means by which the Jacobins and the CPS controlled France were not bourgeois methods, with popular democracy being introduced and much more radical policies surpassing those made by the National Assembly. However, despite the sans-culottes having a huge influence on the course of the Revolution, especially in 1793, they were a group that lacked organisation, meaning they never took power, even though they had the chance. ...read more.

Despite this, this Constitution was never implemented and popular democracy was never put into practice, and the sans-culottes never seized power due to their lack in organisation. Instead, Robespierre and other middle class Jacobin ministers regained power in 1794 from the sans-culottes and the sans-culottes were weakened considerably, and eventually lost complete power in 1795 in the Vendemiaire uprising. The Thermadorians took power instead, and created the 1795 Constitution that restored the policies introduced by the National Assembly in 1791. The Thermadorians themselves were middle class. Looking over the entirety of the French Revolution, I believe that the comment was valid to a good extent, as it was always the bourgeois who controlled the Revolution - be it from the National Assembly, the Legislative Assembly, the Convention or the Directory. The Constitutions made over this time reflect this statement. However, in 1792, the sans-culottes grew in power and dominated the middle class government, getting their aims achieved rather than those of the middle class. Here it could be said that the sans-culottes directed the Revolution instead, especially in 1793. However, afterwards it is easy to see that the bourgeois regained their control and that over the whole period it was they who benefited most as they dominated the groups that directed the course of the Revolution and created the Constitutions. Thus, I agree to this comment despite the huge impact of the sans-culottes in 1792-1793. India Boddy Page 1 16/01/2008 ...read more.