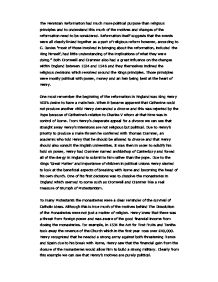 The Henrician Reformation had much more political purpose than religious principles and to understand this much of the motives and changes of the reformation need to be considered. Reformation itself suggests that the events were all clearly linked together as a part of religious reform however, according to C. Davies "most of those involved in bringing about the reformation, included the King himself, had little understanding of the implications of what they were doing." Both Cromwell and Cramner also had a great influence on the changes within England between 1534 and 1546 and they themselves inclined the religious decisions which revolved around the Kings principles. Those principles were mostly political with power, money and an heir being best at the heart of Henry. One must remember the beginning of the reformation in England was King Henry VIII's desire to have a male heir. When it became apparent that Catherine could not produce another child Henry demanded a divorce and this was rejected by the Pope because of Catherine's relation to Charles V whom at that time was in control of Rome. ...read more.

Even though Henry was a devote Catholic, which we can see in his writing 'The Kings Book' he let Cromwell have much influence on his decisions. However, if we look at the religious status at the end of Henry's reign it was still much Catholic and not much had changed religiously. An example of would be the invalidation of Cromwell's Act of 10 Articles. Although this reduced the number of sacraments and left transubstantiation ambiguous, Cromwell died and Henry reversed it by introducing the Act of 6 Articles which mostly reinstated Catholic traditions and practises. Even when religious reform was introduced it was reversed to suit Henry's personal judgment. The final and decisive act came in 1534 when the English Parliament passed the Supremacy Act, making the English monarch the supreme head of the English church - not the Pope. Reaction to this final move was mixed and many people supported Henry for purely political reasons. It was at this time that nationalism was slowly developing throughout Europe and people were objecting to the idea of a foreign power, even Rome, having any significant say in the political destiny of their country. ...read more.

The copy of The Great Bible was translated in English which was a huge step towards Protestantism as the Bible text was vernacular and available for the first time to many who were not able to read it. By 1544 even the Litany was being read in English. Cromwell and Cranmer seemed to have achieved much religious change by 1546 and they accomplished this by giving Henry the power he desired. From the study of the motives behind the English Reformation I believe that the Henrician Reformation was much more political than it was religiously. Henry achieved much authority and financial gain through the reformation and also attained a divorce. The key reason for breaking with Rome was Henry himself and his greed and selfishness. However, the reformation did see some religious change from the Protestant influence from both Cromwell and Cranmer. It is clear that whilst flattering Henry with political and financial benefit they managed to force religious change into the reformation. In conclusion Henry used religion as an outward motive but inside the King wanted what was beneficial for himself. ...read more.