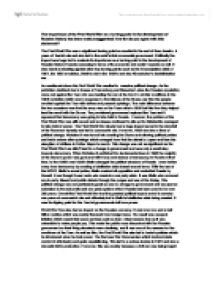 The importance of the First World War as a turning point in the development of Russian history has been vastly exaggerated. How far do you agree with this statement?

The importance of the First World War as a turning point in the development of Russian history has been vastly exaggerated. How far do you agree with this statement? The First World War was a significant turning point as resulted in the end of three hundred years of Tsarist rule and also led to the world's first communist government. Politically the impact was huge but to evaluate its importance as a turning point in the development of Russian history it needs assessing in terms of its economic and social impacts as well. It also needs evaluating against other key turning points such as the Emancipation edict of 1861, the 1905 revolution, Stalin's rule in the 1920's and also Khrushchev's destalinisation era. As mentioned above the First World War resulted in massive political change. As the patriotism declined due to losses at Tannenburg and Masurian Lakes the Russian population came out against the Tsar who was leading the war at the front. In similar conditions to the 1905 revolution which was in response to the failures of the Russo j*p War the people revolted against the Tsar with strikes and peasant uprisings. The main difference between the two occasions was that the army was on the Tsars side in 1905 but this time they helped lead the revolt with the Duma. ...read more.

Stolypin's attempt created the richer Kulak class whereas Khrushchev's Virgin Land Campaign had success at the start but by 1960 all the soil had eroded and production was very low. Overall these economic developments had little impact and it was Stalin's five year plans that had the greatest impact in the development of Russian history and therefore on economic terms the First World War has been over exaggerated. Social impacts caused by the World War include the loss of millions of lives, food shortages and a lower standard of living. Over one and a half million people died fighting for Russia in the war and another two million people were captured or seriously injured. This meant that there was a huge fall in Russian population and this made it harder to increase productive capacity back to what it was previously at. There was also a very high ratio of women compared to men which meant that birth rates were low in the next few years. Food shortages were an issue as grain requisition started during the war and continued under Lenin until 1921 when the civil war ended. These impacts are very limited in nature. This contrasts massively with other times during the period. The 1861 emancipation should have been a massive social change. ...read more.

officially but Lenin always had the final say, it was his interpretation of marxism that people followed - NEP was his policy which was largely unpopular and Treaty of Brest Litovsk was his idea Stalin did too - using the cult of personality Next paragraph - Communists more autocratic than Tsars Had more control - totalitarian - due to centralisation - e.g collectivisation - enabled greater control of peasants. Grain requisitioning under Lenin and Stalin - something Tsars would never have dreamt of enforcing - too invasive. But the Communists had greater control over the countryside and the factories More repressive and more successful in being so: Secret police stronger than ever under Lenin and Stalin, great purges Ohkrana small, Cheka large Gulag existed under Stalin and Krushchev (and lenin???) Better at exiling, under Tsars people just came back - Stalin and Lenin did! But under the Communists they eliminated them Better at dealing with opposition - Stalin so paranoid that he assassinated any potential threat - Kirov, Trotsky - but Tsars did not eliminate many potential threats Conclusion Partly agree with the view - but it is not as black and white - Tsars whilst they did show periods in which they were ineffective autocrats, did maintain power quite well considering the size of Russia. However compared to the Communists they were not very effective. Communists much better....... ...read more.