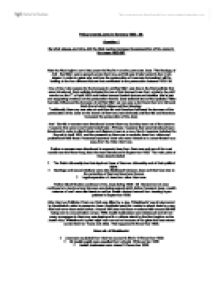 Policy towards Jews in Germany 1933 - 39: Question 1 By what stages, and why, did the n**i regime increase its persecution of the Jews in the years 1933-39? After the n**i regime came into power the n**i's moved to persecute Jews. This ideology of Anti - Semitism was to spread across Germany and this was implemented in four main stages. In order to a***s why and how the persecution of Jews was increasing I will be looking at the four different factors that contributed to the persecution between 1933 -39. One of the main reasons for the increase in anti-Semitism was due to the n**i policies that were introduced. Such policies included the law of that banned Jews from a jobs in the civil service on the 7th of April 1933 and further banned Jewish doctors and dentists. this is just one supporting evidence of the persecution that the Jews suffered due to n**i policies. ...read more.

* Marriage and s****l relations were also disallowed between Jews and Germans due to the protection of German blood and honour. * Legal separation of Jews from other Germans. Further discrimination continued of the Jews during 1936 - 39. Harassment of Jews continued at a low level and decrees were being passed which further harassed Jews. Jewish veterans of ww1 were dismissed as well as Jewish doctors banned from treating Aryan patients in September 1938. After German Politician Ernst von Rath was killed by a Jew, 'Kristallnacht' was implemented by Goebbels in order to persecute Jews. Goebbels used the murder to attack Jews in a way that had never been seen before. Around 100 Jews had been murdered with around 26 000 being sent to concentration camps. 7000 Jewish businesses were destroyed and almost every synagogue in Germany was destroyed in a vicious attack by the n**i regime on the Jewish race. ...read more.

The other main step in the persecution of the Jews was Kristallnacht. The level of violence had increased rapidly from previous harassment which included public embarrassment but now Jews were beginning to be sent to concentration camps which was a step up in the level of the persecution of the Jews. The Government involvement was now also in the open. There was no longer any holding back on the Jews and this led to many vicious attacks upon businesses and synagogues alike in November 1938. Jews could no longer tolerate the way they were being treated and some of the Jews had chosen to leave Germany for safer neighbouring countries yet many Jews stayed behind and were persecuted beyond humane levels. The marking out of Jews was also starting to occur. Jews were made to wear the star of David and had their passports stamped in order to signify that they were of Jewish origin. In order to get married, couples had to bring proof of heritage in order to signify that they had no Jewish heritage. This was the marking out of the Jews which is also known as 'Ghettonisation.' ...read more.