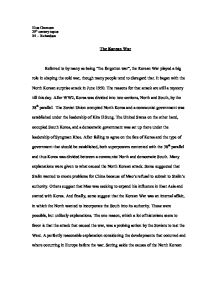 Elias Chamoun 20th century topics R5 - Richardson The Korean War Referred to by many as being "the forgotten war", the Korean War played a big role in shaping the cold war, though many people tend to disregard that. It began with the North Korean surprise attack in June 1950. The reasons for that attack are still a mystery till this day. After WW2, Korea was divided into two sections, North and South, by the 38th parallel. The Soviet Union occupied North Korea and a communist government was established under the leadership of Kim Il Sung. The United States on the other hand, occupied South Korea, and a democratic government was set up there under the leadership of Syngman Rhee. After failing to agree on the fate of Korea and the type of government that should be established, both superpowers contented with the 38th parallel and thus Korea was divided between a communist North and democratic South. ...read more.

If the Soviets were present, they would have surely vetoed the resolution, thus making any intervention in Korea under UN heading impossible. It seems that the war in Korea was for the most part caused by the North Korean invasion of the South. Though the US decision to intervene, under the heading of the United Nations, is another major cause of the Korean War. The Americans were hasty to intervene; though at the same time the Truman administration was truly committed to the UN, and sought its cooperation before any action was taken. The UN did follow the lead of the US, who was given control of the UN military forces that would drive back the North Koreans behind the 38th parallel. In less then a month after the North invaded the South, UN forces started arriving and engaging North Korean forces. The daring landing at Inchon in September 15 1950, orchestrated by General MacArthur, turned the tide of the war. ...read more.

They emerged as the leader in East Asia. The war had also ended the American "illusion" of the historical Chinese-American friendship. To the shock and disappointment of the Americans, the Chinese were no longer "our friends", but another communist regime that poses threat to democracy. Another effect of the Korean War was "the loss of the UN's power to be a truly neutral mediator in Korea". "The UN became a party to the war and remained identified with one side, the American one, in the conflict to the end". Finally, an effect not mentioned in the readings, though highly possible, was Soviet upset. The UN Security Council's decision to intervene militarily in Korea without consenting with the Soviet Union (due to their absence). The loss of an Asian ally (North Korea) to his foe (Mao). The interference of the Americans and their help to the imperial powers (Britain & France) in the region. All of these events and occurrences might have angered Stalin. Not to mention the growing influence of China in East Asia, the region where Stalin had hoped the USSR would be the main player. ...read more.