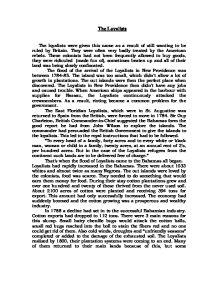 The Loyalists The loyalists were given this name as a result of still wanting to be ruled by Britain. They were often very badly treated by the American rebels. These colonists had not been frequently allowed to buy goods, they were ridiculed (made fun of), sometimes beaten up and all of their land was being slowly confiscated. The flood of the arrival of the Loyalists in New Providence was between 1784-85. The island was too small, which didn't allow a lot of growth in plantations. The out islands were then the perfect place when discovered. The Loyalists in New Providence then didn't have any jobs and caused trouble. When American ships appeared in the harbour with supplies for Nassau, the Loyalists continuously attacked the crewmembers. As a result, rioting became a common problem for the government. The East Floridian Loyalists, which were in St. Augustine was returned to Spain from the British, were forced to move in 1784. ...read more.

About 2100 acres of cotton were planted and receiving 394 tons for export. This amount had only successfully increased. The economy had suddenly boomed and the cotton growing was a prosperous and wealthy industry. In 1788 a decline had set in to the successful Bahamian industry. Cotton exports had dropped to 112 tons. There were 3 main reasons for this slump. Small hairy chenille bugs would attack the cotton b***s, small red bugs reached into the boll to stain the fibers red and no one could get rid of them. Also cold winds, droughts and "unfriendly seasons" completed or added to the damage of the exhausted soil. The Loyalists realized by 1800, their plantation systems were coming to an end. Many of them returned to their main lands because of this, but some remained. The majority of their slaves also remained and took up fishing as well as farming. ...read more.

The American War of Independence was what caused the Loyalists to come to the Bahamas. By the 1770's many Americans resented British inference in their internal affairs as well as the Loyalists. As a result the thirteen American Colonies wanted to break away from British unbearable rules and set up the United States of America. In order to achieve this goal they had to win the war. Because the loyalists were loyal to Britain they supported them in the war in 1775. They were smart and realized the American navy was too small, badly equipped compared to Britain's navy. It was definitely large and fully prepared. Unfortunately, Britain's navy had lost the war in 1783 against the victory of America with foreign help and their plans had backfired on them. The Treaty of Versailles was drawn up and gave America her freedom. Sadly that's when the Loyalists were in search of a new home because they were forced to move and be living somewhere else by the following year. ...read more.