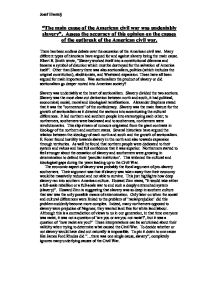 "The main cause of the American civil war was undeniably slavery". Assess the accuracy of this opinion on the causes of the outbreak of the American civil war. There has been endless debate over the causation of the American civil war. Many different types of historians have argued for and against slavery being the main cause. Elbert B. Smith wrote, "Slavery worked itself into a constitutional dilemma and became a symbol of disunion which must be destroyed for the salvation of America itself". Other than Slavery there was also sectionalism, politics (which includes the original constitution), abolitionists, and Westward expansion. These have all been argued for main importance. Was sectionalism the product of slavery or did sectionalism go deeper rooted into American society? Slavery was undeniably at the heart of sectionalism. Slavery divided the two sections. Slavery was the most clear-cut distinction between north and south, it had political, economical, social, moral and ideological ramifications. Alexander Stephens stated that it was the "cornerstone" of the confederacy. Slavery was the main feature for the growth of sectionalism as it directed the sections into accentuating the cultural differences. It led northern and southern people into stereotyping each other; to northerners, southerners were backward and to southerners, northerners were revolutionaries. ...read more.

But this, accompanied by the economical inferiority in the south starts to reveal some reason for the intense friction. Historians have emphasised and some tried to diminish the extent of economical differences in sectionalism. For example B. Collins stated that the economic differences of north and south were minimal if any. Alternatively Charles Beard stated, "The periphery of the industrial vortex of the northeast was daily enlarging...area of virgin soil open to exploitation by planters was diminishing". He is suggesting here that industry was increasing in the north and agriculture was slowing as a result in the south. Friction increased as the south started to loose grip of the Senate and northern politicians dominated. The differences in agriculture was also massive, Kenneth M. Stampp stated, "Differences in geography, soil, and climate created a different society in the south". This is true because the land in the north was superior for building industry to the south. But also, land in the south was better for farming. So, in reality, because of these different geographical conditions the south developed into a society with different and distinct culture. Sectionalism encompasses a massive difference economically, socially, and agriculturally, it is from these reasons that it can be suggested that sectionalism was very important in the causation of the civil war. ...read more.

(Alan Farmer) A quote from a newspaper at the time, "The Harper's ferry invasion has advanced the cause of disunion more than any other event has...since the formation of...government". The event heightened paranoia and increased tension until one ignition would cause civil war. This cause was not mainly over slavery itself, but over the politics of slavery. The final blow came when Abraham Lincoln was elected as the first Republican President of the United States. It was the last straw for the south and precipitated a secession crisis with the 'deep south' states deciding immediately to leave the Union, followed later by the other southern states to form the confederacy under the leadership of Jefferson Davies. Civil War had begun. In conclusion, there is no doubt that slavery played a massive role in the causation of the civil war. It does not seem that slavery is the singular reason for war. Sectionalism played an important role, the differences in soil, climate and culture suggested from the start that something would polarise them. The politicians at the time were trying to fight an impossible battle to save the country from war; if it was not slavery then something else would have separated them. Although slavery made the battle in politics more intense, it was not the singular cause. ...read more.