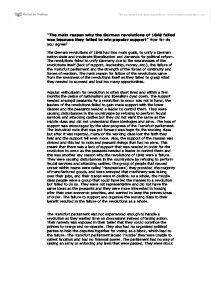 The main reason why the German revolutions of 1848 failed was because they failed to win popular support How far do you agree?

"The main reason why the German revolutions of 1848 failed was because they failed to win popular support" How far do you agree? The German revolutions of 1848 had two main goals, to unify a German nation state and moderate liberalisation and demands for political reform. The revolutions failed to unify Germany due to the weaknesses of the revolutions itself (lack of support, leadership, money, etc.), the failure of the Frankfurt parliament and the strength of the forces of continuity and forces of reaction. The main reason for failure of the revolutions came from the weakness of the revolutions itself as they failed to grasp what they needed to succeed and lost too many opportunities. Popular enthusiasm for revolution is often short lived and within a few months the desire of nationalism and liberalism dyed down. The support needed amongst peasants for a revolution to occur was not in hand, the leaders of the revolutions failed to gain mass support with the lower classes and the peasants needed a leader to control them. They were causing disturbances in the countryside by refusing to perform feudal services and attacking castles but they did not want the same as the middle class and did not understand there ideologies and aims. ...read more.

The Frankfurt parliament lacked 'muscle' they were unable to collect taxation and had no financial power. The parliament had no way of raising an army or enforcing any laws that were passed. They were stuck in a loose-loose situation, where without a bureaucracy they could not raise any money and without any money they could not raise a bureaucracy. The support of no army always left the German confederation and Frankfurt parliament in a weak and unstable situation, the only army capable of acting as a national army was the Prussian army. However, the Prussian army only accepted the post on the condition that he would no be made to act in any way contrary to the wishes of the King of Prussia, therefore the German confederation was subservient to the king of a Prussia and this meant they would never gain approval to use the military power against Prussia or other reactionary forces and left them in a situation to could not succeed. The leaders of the revolution were unpopular and could not agree on basic and major decisions - they could not even decide if they wanted a Germany which included Prussia and Austria, or a Germany simply made up of the German states, a GrossDeutschland or KleinDeutschland. ...read more.

Given their military advantages and determination they won in the end and once order was restored in Austria they continued to dominate Germany and by keeping her weak and divided, there was no possibility of any moves towards an united Germany being allowed to take place. Germany could only ever be united if the Austrian Empire collapsed and lost its power, therefore the force of Austria resulted in the failure of the German revolutions. The failure of the German revolutions consisted of both the weaknesses of the revolutions itself and the force of reaction, especially from Austria. However, the German revolutions of 1848 cannot be classed as a total failure as although there were no immediate successes there were outcomes that in the long term would benefit Germany. The abolition of the remnants of feudalism meant that many workers were free to work in factories. After 1848, all the monarchical regimes accepted the need to modernise and conservatives saw the need to show an interest in the social problems of the working classes. Most importantly, the 184 revolutions had helped stir nation consciousness across Germany and a general drift towards democracy and parliamentary government. ...read more.

The writer makes it clear that they think the revolutions failed because of their own weaknesses, but they don't compare this factor to the other reasons why the revolutions failed or use enough specific evidence to support their points, and there are some spelling and grammar mistakes. The writer begins the essay strongly with a clear statement that the lack of popular support was one of the revolutions' weaknesses, and these weaknesses were the main reason why they failed. The writer repeats this point again in the concluding paragraph, so their answer to the question is clear and easy to understand. However, although they mention other factors responsible for the failure of the revolutions, like the failure of the Frankfurt Parliament and the forces of continuity, they don't assess the importance of these different factors and compare them to each other, so their answer isn't properly justified.

The writer demonstrates appropriate analytical skills by evaluating how different factors weakened the revolutions - eg., the slow process of the Frankfurt Parliament meant that the working class lost faith in the revolutions. But this evidence isn't specific enough - they could try using statistics and specific examples to back up their points. For example, they could mention that the Frankfurt Parliament was known as 'the professor's parliament' because 80% of its members had university degrees, to back up their point that the educated, middle-class leaders of the revolution were disconnected from the working class.

The writing is fluent and sophisticated, and there's appropriate use of German expressions from political discourse of the time like "Handwerkers" and "GrossDeutschland", which shows that they know this period well. Unfortunately it's let down by several grammar and spelling mistakes, such "There ideologies and aims" in paragraph 2, line 6, which should read "their ideologies and aims". They repeat their point about peasants "refusing to perform feudal services and attacking castles" twice in paragraph 2, although that could be a typo. Using slang in essays, as in "the Frankfurt parliament lacked 'muscle" (paragraph 3, line 4), and " a loose-loose situation" (paragraph 3, line 5 - and it should be spelt "lose-lose"), always looks bad, even if the slang is put in quotation marks, because essays should be written in a more formal style than the writer would use in speaking. This essay is not structured as one would expect at AS and A-level, making it confusing to read because it doesn't assess the different factors in an ordered way. It would be better to focus each paragraph on one factor which led to the failure of the 1848 revolutions, writing about them in descending order of importance, and begin with a clear statement of that factor (Eg. paragraph 6 could begin "In addition, Austria's military force helped to defeat the revolutions"), then explain that factor, and conclude by evaluating how important you think that factor is in relation to the others (Eg. "Austria's military force was a less important factor than the weaknesses of the revolution and the failures of the Frankfurt Parliament because...") The writer also needs to link the different paragraphs together using connectives such as 'in addition', 'however', 'furthermore', 'in contrast', 'finally' etc, which again would make this essay easier to follow.