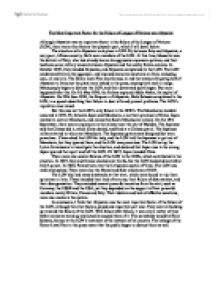 The Most Important Factor for the Failure of League of Nations was Abyssinia Although Abyssinia was an important factor in the failure of the League of Nations (LON), there were other factors that played a part, which I will detail below. The situation with Abyssinia took place in 1935-36, between Italy and Abyssinia, a very poor, African country. Both were members of the LON. At this time, Mussolini was the dictator of Italy, who had already shown his aggressive expansion policies, and their had been some military tension between Abyssinia and the nearby Italian colonies. In October 1935, Italy invaded Abyssinia, and Abyssinia complained to the LON. The LON condemned Italy as the aggressor, and imposed economic sanctions on Italy, excluding coal, oil and iron. ...read more.

The Manchurian incident occurred in 1931-33, between Japan and Manchuria, a northern province of China. Japan wanted to control Manchuria, and owned the South Manchurian railway. On the 18th September, there was an explosion on the railway near the city of Mukden. The Japanese said the Chinese did it, which China denied, and fired at a Chinese patrol. The Japanese military started to take over Manchuria. The Japanese government disagreed but were powerless. China asked the LON for help, and the LON told the Japanese to get out of Manchuria, but they ignored them, and the LON was powerless. The LON set up the Lyton Commission to investigate the situation, and declared that Japan was in the wrong. ...read more.

These included their lack of an army, their failure of disarmament, and their disorganisation. They excluded several powerful countries from the start, such as Germany, the USSR and the USA, yet they depended on the support of their powerful members-mainly Britain, France and Italy. Their idealism and lack of effective sanctions, were also cracks in the system. In conclusion, I think that Abyssinia was the most important factor of the failure of the LON, although the other factors played and important part also. They were all building up towards the failure of the LON. With failure after failure, it was only a matter of time before someone stood up and actually accused them of it. This somebody would be Haile Selassie, furious at the LON's treatment of the invasion of his country. The leakage of the h***e-Laval Plan to the press meant that the public began to distrust them as well. ?? ?? ...read more.