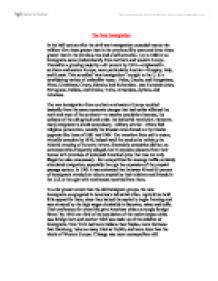 The New Immigration In the half century after the civil war immigration exceeded twenty-six million- five times greater than in the previous fifty years and three times greater than in the previous two and a half centuries. Up to 1880 or so immigrants came predominantly from northern and western Europe. Thereafter a growing majority-85 percent by 1914-originated in southern and eastern Europe, more particularly Austria-Hungary, Italy, and Russia. This so-called 'new immigration' brought to the U. S. a bewildering variety of unfamiliar types : Poles, Czechs, and Hungarians; Finns, Ukrainians, Croats, Slovaks, and Ruthenians ; east European Jews; Portuguese, Italians, and Greeks; Turks, Armenians, Syrians, and Lebanese. The new immigration from southern and eastern Europe resulted basically from the same economic changes that had earlier affected the north and west of the continent-a massive population increase, the collapse of the old agricultural order, the industrial revolution. However, many emigrated to avoid compulsory, military service. Others fled religious persecution, notably the Russian Jews forced out by Czarist pogroms like those of 1881 and 1904. The transition from sail to steam, virtually complete by 1870, helped swell the exodus by robbing the Atlantic crossing of its worst terrors. Steamship companies did not, as contemporaries frequently alleged, lure Europeans peasants from their homes with promises of well-paid American jobs; that was not only illegal but also unnecessary. But competition for steerage traffic certainly stimulated emigration, especially through the expansion of the prepaid passage system. ...read more.

The first of a series of Chinese Exclusion Acts was passed the same year. Thereafter the list of excluded classes was successively enlarged. By 1907 it included contract labourers, persons suffering contagious diseases, polygamists, prostitutes, anarchists, and persons advocating the violent overthrow of the US government. Ellis Island, which replaced Castle Garden in 1892 as New York's immigrant landing depot, was given the task of detecting and excluding undesirables. In fact only about 2 percent of the arrivals were found inadmissible and sent back to Europe. But all immigrants were subjected to searching interrogation and scrutiny and many thousands were annually detained for inquiry for varying periods before being finally admitted to the Promised Land. In the 1930's Immigration which had exceeded four millions in the 1920's, dropped to barely half a million in the 1930's, the lowest total for more than a century. This was the consequence, less of the immigration-quota system, than of the Depression. Few foreigners wanted to come to an economically crippled country. In some years more people left the US than entered it. Perhaps half the new arrivals were refugees, especially German and Austrian Jews, fleeing from n**i persecution. They included some eminent figures : Albert Einstein, the novelist Thomas Mann, the Bauhaus architect Walter Gropius, the theologian Paul Tillich, the composer Paul Hindemith. The refugee influx would have been larger but for the fact that, with millions out of work, Congress refused to grant asylum to more people than the quota system permitted. ...read more.

Displaced Persons Act (1948-50) In an attempt to relieve the massive refugee problems created by world war 2, Congress passed two displaced persons acts. Refugee Relief Act (1952) The refugee relief act permitted the entry of a further 214,000 people, most of them escapees from behind the Iron Curtain. Immigration Restriction League The immigration restriction league was founded in 1894 by a group of race-conscious Boston patricians. Arguing that the 'Anglo Saxon' element in the American population was in danger of being swamped by lesser breeds, the league campaigned vigorously for a literacy test as a means of excluding most of the new immigrants. Irish Immigrants Irish immigrants feared the economic competition of freed n*****s flocking to the north, while northern businessmen, especially those with southern connections, were apprehensive lest southerners react to abolitionist agitation by boycotting Northern products. In the New York draft riots of July 1863 a largely Irish mob terrorized the city for three days, lynching blacks, destroying property and burning down a n***o orphan asylum. Urban concentration was most marked among the Irish. Despite their overwhelmingly rural origin only about 8 percent settled on the land. City bosses were usually men of little education and of a recent immigrant origin (usually Irish), preferred not to seek political office themselves but to operate behind the scenes. Jewish Immigrants There was increasing hostility to another prominent element in the new immigration, the Jews. Vicious r****t slurs and anti-Semitic cartoons appeared in the popular press; Jews found themselves increasingly excluded from clubs, hotels, summer resorts, and private schools. ...read more.